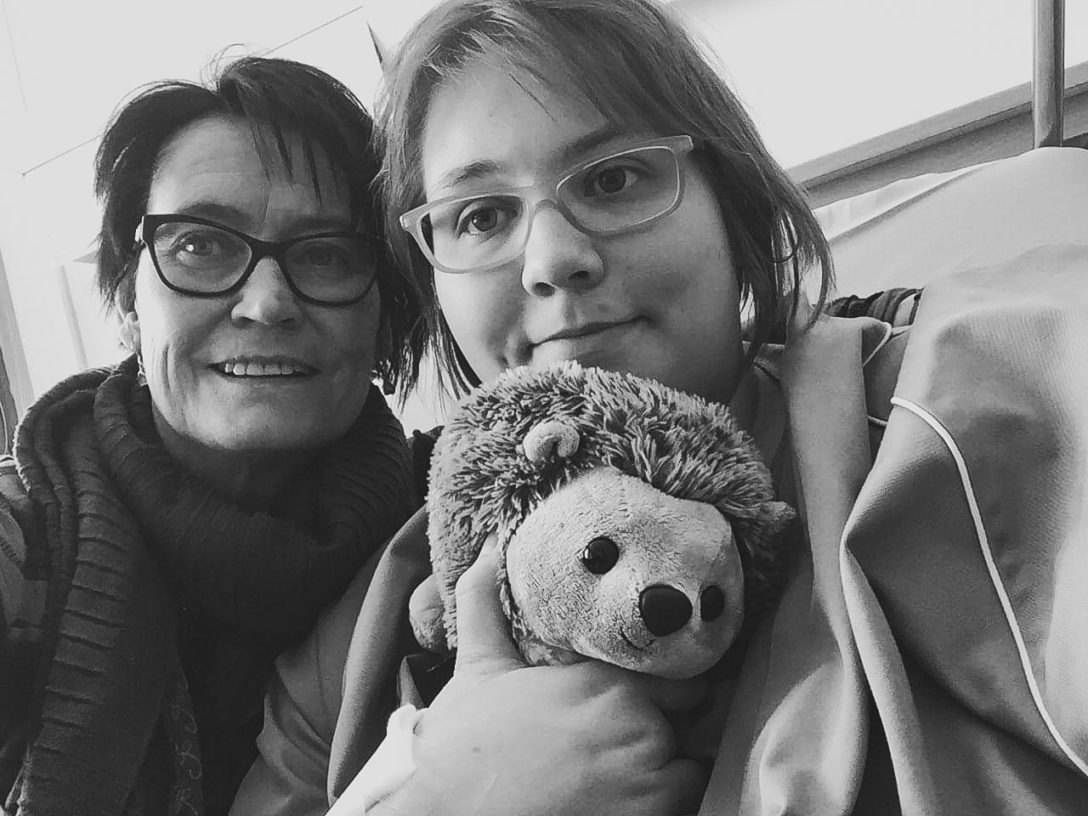 11 April 2019, I celebrated my second birthday for the third time. In light of this, I thought this week would be the ideal time to talk about doing BJJ as a disabled person with wide-spread chronic paresthesia and other assorted issues. This week I also went to see the Finnish Open, but I’ll write about that experience later.

The Grand Opening of My Head

Short version to what happened is this: in March 2016, an MRI showed “a tumour of unknown growth tendency” on the lower part of my brainstem and upper part of the spinal cord. As the location was critical and adjuvant therapy imminent, a “resection” was scheduled. Surgery in April 2016 went well, in the circumstances: the tumour could not be removed completely, and a tiny coating of it was left on my brainstem. The blog’s feature image is me and my mum in hospital during that time. Pathology delivered the best possible news. What had been assumed to be a malignant tumour (ependymoma and medulloblastoma were tossed around as guestimates) turned out to be a benign, very slow-growing tumour. The pathologist’s reports included both ganglioglioma and the even rarer gangliocytoma as possible diagnoses, maybe they could never really decide for themselves. I’m monitored regularly and for now, the little dot of tumour matter on MRIs has not shown any growth.

The tumour and its resection may contribute to my occasional visual migraine aura with minimal pain and trouble swallowing I sometimes experience. The largest impact, however, is on my sense of touch, which nowadays works like this:

Red markings are tingling, purple bits are areas of numbness. This is how my body feels every waking moment, except feelings of intense anxiety start the tingling on the left side of my face as well. When I woke from surgery in 2016, I couldn’t feel my legs. Things improved, and at present I again have a general knowledge of where my feet are at all times.

But how is it like to train BJJ with extensive sensory damage? My experience is only mine, but in general it’s really great (as an experience, I’m still not very good. In the beginning, I was careful to tell every instructor and most training partners what was going on with my wonky body. Now I’ve become so used to training I haven’t felt the need to mention it every single class. In the areas my training is affected, I feel it’s easiest to recount some examples from training.

When I ran as a warm-up for the first time in, well years, I proudly tripped over my own legs and fell on my face. Feeling the ground beneath your feet only partially makes it a bit challenging to put one’s best foot forward. But guess what? If warm-ups include jogging (and one instructor is very fond of them), I still participate, and haven’t tripped again! Decreased feeling in my legs makes doing take-downs with any finesse a bit challenging as well. I suspect that if I start competing, I’ll become an avid guard puller.

2. I Sometimes Have to Watch my Feet

Fundamentals. I’m in half guard, with Head Coach and training partner both explaining the technique to me again.

Nice try, but I can’t. Well, I can, but only with much concentration that would eat into precious hooking time during sparring. Knowing where my feet are from the knees down when I can’t see them myself is a challenge, I won’t lie. The first time I tried spider guard, I couldn’t even feel my opponent’s upper arms. So much for assessing the right position to sweep them. Practice has improved my ability to process the limited sensory signals that actually reach my brain from my feet. Let’s see how much it can improve.

I used to be really sensitive prior to what is essentially a spinal cord injury. Now, my limbs tolerate pain, especially dull pain, far better than before. If your pastime of choice involves joints being bent, this is not really a positive.

Open Mat at another gym. I’ve ended up sparring with another white belt from my own gym. I try to escape from his Americana and don’t tap instantly.

“Ummh, have you got hypermobile joints?” he asks meekly.

“Okay. Your arm extended quite far. I’d have that checked out, just in case.”

I didn’t get it checked out. But I’ve became a bit better at tapping before anything hurts.

I wouldn’t recommend getting yourself a brain tumour and gammy spinal cord. Still, without going through the experience I went through I wouldn’t now be doing BJJ. My progress is laughably slow and I’ll never be World Champion, but for the unforeseeable future, me and my broken body will continue to hit the mats. Some lessons will reach me a lot slower than the average grappler, but you know what? That’s completely fine.