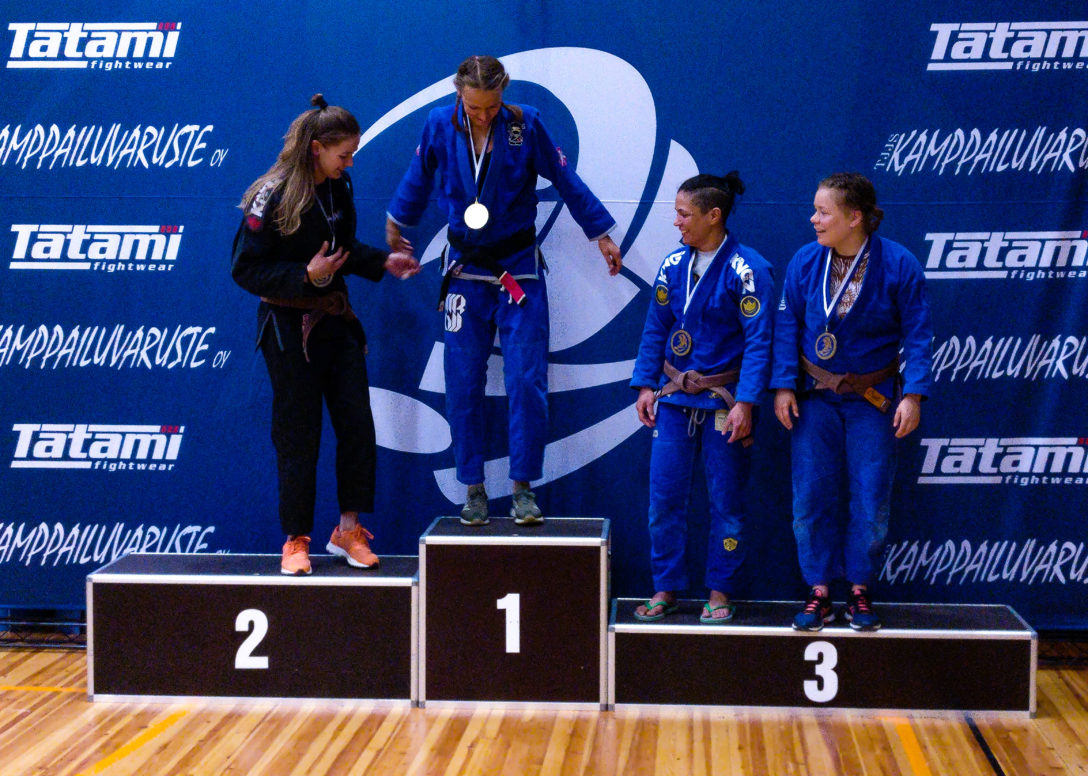 During the past two weeks, I’ve been training more or less successfully. I wanted to write more about how attending Finnish Open two weeks ago went. As someone who has never previously cared for any competitive sport, I can tell the experience feels very different when you know at least something about the sport or people competing.

I arrived at Trio Areena in Tikkurila, Vantaa in the early afternoon. The matches had been going on since morning, as there were over 300 to rattle through that day. Several members of my gym team had already lost some of their matches and were done with competing. Spotting Estonian friends in the crowd cheered me up, as well as other familiar faces from Open Mats and the one camp and seminar I’ve hitherto been at.

Me and a couple of training partners who weren’t competing that day either kept moving from mat to mat, cheering encouragement or just enjoying the matches. I was at the No-Gi Finnish Open in 2018, when I went to check out how scary BJJ actually would look when the people doing it wanted to win. This time, things were different. Seeing training partners on the mat was nerve-inducing in a completely new way. Nevermind winning, I was worried of them getting hurt! Not to mention how odd the sensation of seeing two people I both knew and respected face each other in one of the Women’s matches.

“Isn’t it strange when you want both competitors to win?” I asked one of the Estonians I now know in this new life of mine. She agreed.

There is a beauty in people first trying to twist each other’s heads of and beaming on a podium a short while later. As there is beauty in the remorse of a young competitor’s eyes when they have unwittingly injured their opponent and are doing all they can to make sure the other party receives medical advice promptly. And there is beauty in the way Coach looks when he assumes his position as Encouraging Shouty Ball of Nerves by the mat when one of us is competing. Again. And again. And again.

I stay for six hours. I’d planned to stay for maybe two.

Partner comes with me, but only because a common friend is competing that day. He joins me at the edge of the mats when important matches are happening, which warms my heart. 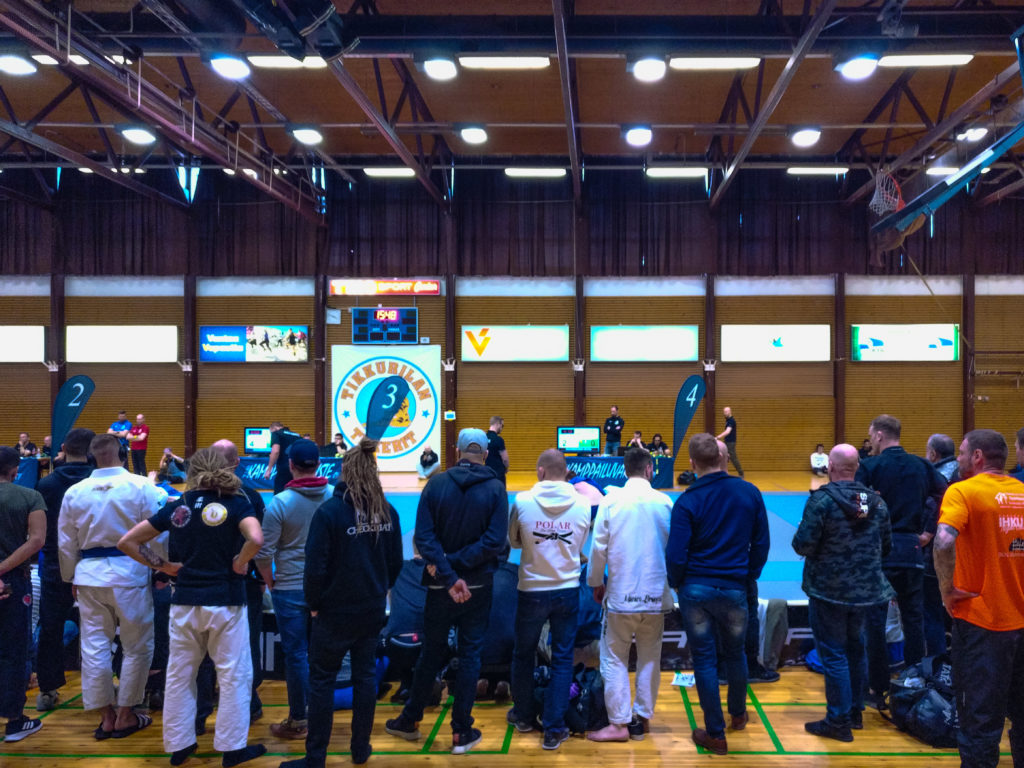 Sunday is even worse for emotions than Saturday, probably because white belts are competing and I identify with them more than the coloured belts from the day before. The friend my partner has come to see makes me cry in her first match, both with her tenacious spirit and by her friends from several countries shouting encouragement. I cheer, and cry, and cheer. She won.

Our gym did not bring home a massive amount of medals, but I felt pride for everyone of my training partners having the guts to compete. And other friends and acquaintances.

Don’t get me wrong, I still think 1) competitive sport is, at the end of the day, pretty pointless in itself 2)

venerated far too highly in Finnish society. I understand the way sport and nationalism are interlocked and find it annoying that non-sporty news outlets have to update people on the state of the sporty news several times a day. And I find it annoying that me not caring that someone who wins a medal in skiing or javelin or ice hockey happens to share my nationality is somehow snobbish. Again, people or teams working hard is all brilliant. That it should awake some patriotic pride in me makes me want to get in the sea.  But what I’m trying to say, is that this sport apatheist who genuinely doesn’t care for most sport can really get into some good BJJ competing. Because I’m an emotional person, the tensions and expectations and hopes and dreams and camaraderie really made the Finnish Open for me as an event. And regardless of dislocated shoulders, tears and short bouts of unconsciousness I witnessed, the experience made me want to compete even more than before. I do not have to win. But I want to survive at least one match in the not-too-distant-future.