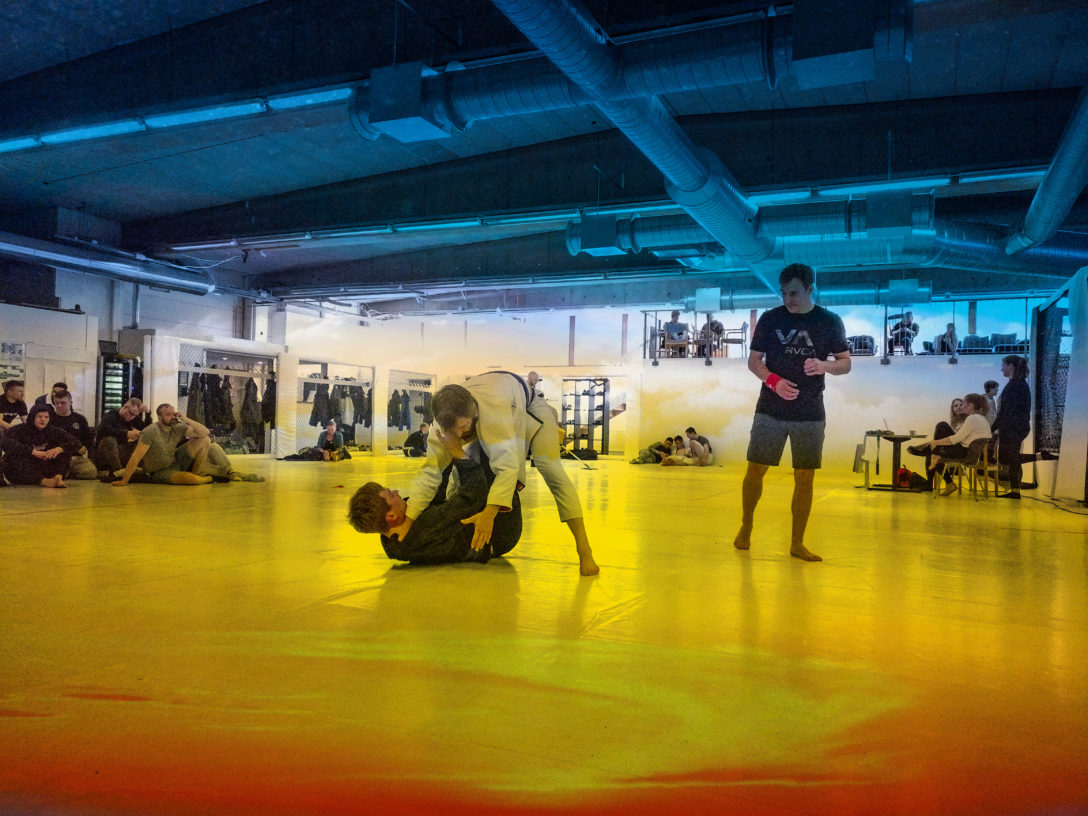 May 25, 2019, I took myself to Pitäjänmäki in North-Western Helsinki to watch Loop Spring Challenge, a BJJ competition organised by Loop Martial Arts. It was the first smallish jiu-jitsu competition I went to see and made for an exciting show, especially with 13 teammates on the brackets.

Like I wrote in the post about the BJJ Finnish Open, I’ve never cared for sports before Brazilian Jiu-jitsu. The day after the Spring Challenge, the Finnish ice hockey team won the world championships, and I was happy for those people to whom it mattered but pretty nonchalant otherwise. BJJ is unsurprisingly a different animal. I enjoy trying to decipher a match, who does what to whom, and where the points handed out actually came from. As this competition consisted of over 100 matches on 2 mats, there were a lot of opportunities to learn by watching.

Loop is Fancy and White

The competition venue, Loop Martial Arts, has operated under its current name since early 2019 and seems to be pretty well-kept by BJJ standards. Not all gyms have a loft area complete with a sofa, where assorted babies, children, and some partners of competitors had camped out to watch the matches. Visually the single large training space is pretty unique compared to other gyms I’ve seen thus far. Loop has not only white walls, but completely white mats as well. The impression is somewhat clinical but makes for some excellent photo opportunities. Herttagram was photographing at the competition, go check her pics out if you want to see better shots than my phone snaps! Incidentally, I appear in the background of some shots, either 1) looking at my phone or 2) my training partners sitting on the same bench, and not at the matches going on. Typical.

I found uncharacteristic team spirit in me watching this competition, too. 13 people training at my gym were competing, 6 of them ended up getting medals. That had very little to do with me but I still felt  tiny bit proud. And pride extended far beyond the medals. I felt pride for one of my training partners who ended up winning a much younger, probably fitter opponent. I felt pride for one of my instructors who was refereeing, for having the skill and constitution to stay alert for dozens of matches. And I felt pride for an acquaintance from another gym who lost both of her matches – it was her first competition ever, and she did not run and scream but stepped on the mat when called. I hope to manage at least that when I compete the first time.

All in all, 5/5 entertainment as a spectator activity, this comp, would watch again. And just perhaps, maybe exposing my brain to this many a takedown and sweep and submission gave me some subliminal ideas for my own “game” as well (I almost have to use the quotation marks, as I don’t really have one yet).

Next week, I think I’ll analyse the teeny tiny bit of improvement I’ve made in BJJ this year.