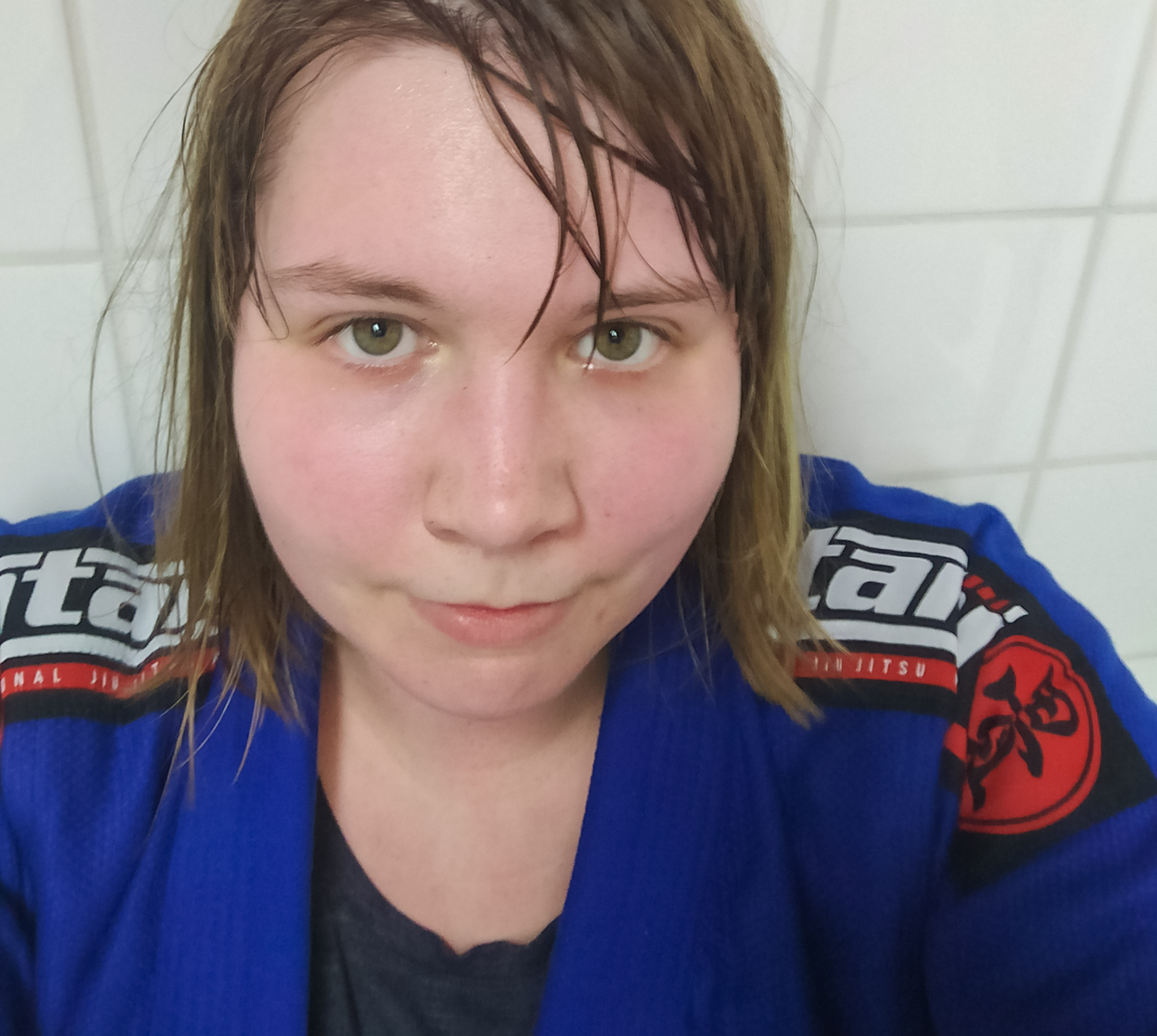 I was going to miss the last class of the beginner’s course on Thursday, so I asked the instructor what I should do instead. “Buy a gi and come to the technique class on Friday.” Okay.

So, I returned to the gym on Friday (Thursday was work evening again) with my blue second hand gi that is a couple of sizes too small. I get absent-minded in December (either because of some mild form of Season Affective Disorder or due to having had a busy autumn), so of course I realised in the changing room that I did not have a training shirt with me to wear under the gi. The gi that was too small and would not close properly.

The nice, no-nonsense woman who said hi to me before one of the basic classes lent me her grey t-shirt. I was very grateful. She also taught me to tie my belt, as I was embarrased to walk in with it flopping everywhere. The woman also frog-marched me to the end of the line of students that was allocated for white belts. She told me I would do fine. And she was my first sparring partner during an actual BJJ class ever, being very gentle with me and not going for any of the many submission opportunities I offered her. I’ll probaby remember her for the rest of my life.

I have now also met the head coach for the first time. From social media I’d caught a glimpse of him as a martial arts professional and family man who did not believe in management by yelling. I liked his frank and friendly style of coaching, even though I still couldn’t do the inverted roll like, at all. Not even when he tried to help me do it. “Well, not everyone learns everything at once”, he said. At least I discovered I’m now able to roll backwards over my own neck and touch the tatami with my foot, curled into a ball. Victory!

The technique class, or Fundamentals as it is known, focused on armbars. I practiced with a teenager I almost kicked in the head several times. To keep things in balance they cracked my elbow painfully during drilling.

I was only supposed to stay for Fundamentals, but ended up doing 4 out of 10 rounds of sparring class too. Sparring is like play combat for BJJ practitioners, where you basically have to grapple for real. 3 of my sparring partners were people presenting as men. The first one was the awfully nice woman from the changing room.

It was so joyful to spar with people who know what they are doing. Or know at least more than me. Details blur into one, and I actually only remember one male partner properly – the one who thanked my after the round for “a great roll”. I felt a bit like a quitter for bowing out of class after 4 rounds, soaked with sweat and trembling. However, I’d already spent 20 minutes more than planned on the mat, so I did win a tiny bit. Maybe next time I’m able to stick around for the whole sparring session.

Week six of BJJ was me discovering how okay I am at not winning during sparring. But to my surprise, I did not have to tap out at all during those four rounds. Maybe the male partners where nice to the new massive part-time woman. Let’s see how this luck continues.