This week featured some annoying flu, as well as panic preparations for a holiday. I also did some light, baffling jiu-jitsu.

CW: this post features mentions of serious illnesses and death, in case you don’t feel like reading about those at the moment 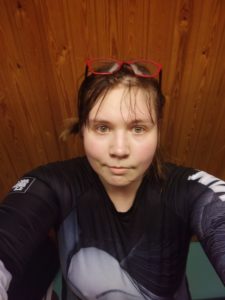 No-gi class. I wore my new rashguard, the first rashguard I’ve ever owned. At the beginning of class I proudly took my place in the line we students form in front of the teacher, only to be lightly scolded for standing between two purple belts. Our gym has very little strict etiquette rules, but white belts are supposed to stand together at one end and higher belts at the other. Of course, I almost made this faux-pas again at the end-of-class-line. Hurrah me.

A stocky purple belt was a very good sport with me as we practiced take-downs for the entire class. I forgot every single technique right after it had been shown to us, forgot to control his legs after taking him down, forgot which way was up and which way down. “Isn’t it nice to be able to succeed?” he asked me from the ground, when I had finally been able to turn in the right direction and pivot him down. I felt good for surviving the class and was very touched by the man’s helpful attitude, even though I sucked hard at most of the take-downs.

I felt fine Monday evening. By Tuesday morning my intermittent flu had returned with a vengeance. Wednesday and Thursday I spent on a Red Cross course in Basic First Aid, trembling and wheezing. The Finnish Red Cross courses are very informative, but all the anecdotes about various accidents and diseases my fellow attendants had endured did not help my mood.

I’m not good with flu these days. Having the sniffles makes me vulnerable in a way that reminds me too much of my 2016. The year my body became a demonstration of faulty electrics. The year an MRI was presented to me as “Well, to go straight to the point, a neoplasm was detected”, and a very clever and very tall man cracked my head open like an egg and had a good rummage around. The year I was told in the neuro ICU I might get to live, after all. The year I walked the hospital corridors over and over again, with my own cerebrospinal fluid sloshing around in my ears. The year I read all scientific studies I could find about infratentorial gangliogliomas and gangliocytomas, desperately trying to calculate the probability of having to die before I got old. The year, when I finally returned home, my old life was gone for good. The year why I will probably never think of myself as a fighter.

Because I am not a fighter, I am a survivor.

However, I now know how to treat anaphylactic shock, sharp chest pain and fractured bones before actual professionals arrive. I believe I will return to the topic of disability and dealing with a changing body at a young age sometime later. Jiu jitsu might have the potential of healing some of my mental scars, I suspect. Even though my neck is still aching after most classes and I’m perpetually bruised.

I toiled in an absolute frenzy to get important work tasks done before my glorious two-week winter holiday. The holiday involves moving house, so we’re in for a treat. I had skipped Muggle Gym on Wednesday but felt better flu-wise. Even I was sensible enough to skip sparring class but I did go to the technique class – and actually felt better after class than before! Could have been the adrenaline. It was only my second class in gi, and all we did was holding on to our training partners trouser legs and using that position to build attacks. The session was eye opening, my one-stripe white belt training buddy much better than me, and I still couldn’t do anything before being shown the movements several times. I loved it.

The gym is on holiday break for the next two weeks. Just as well, I’m awfully busy those weeks too. I’ll try to learn some new solo drills and maybe attempt to finally learn the inverted roll.