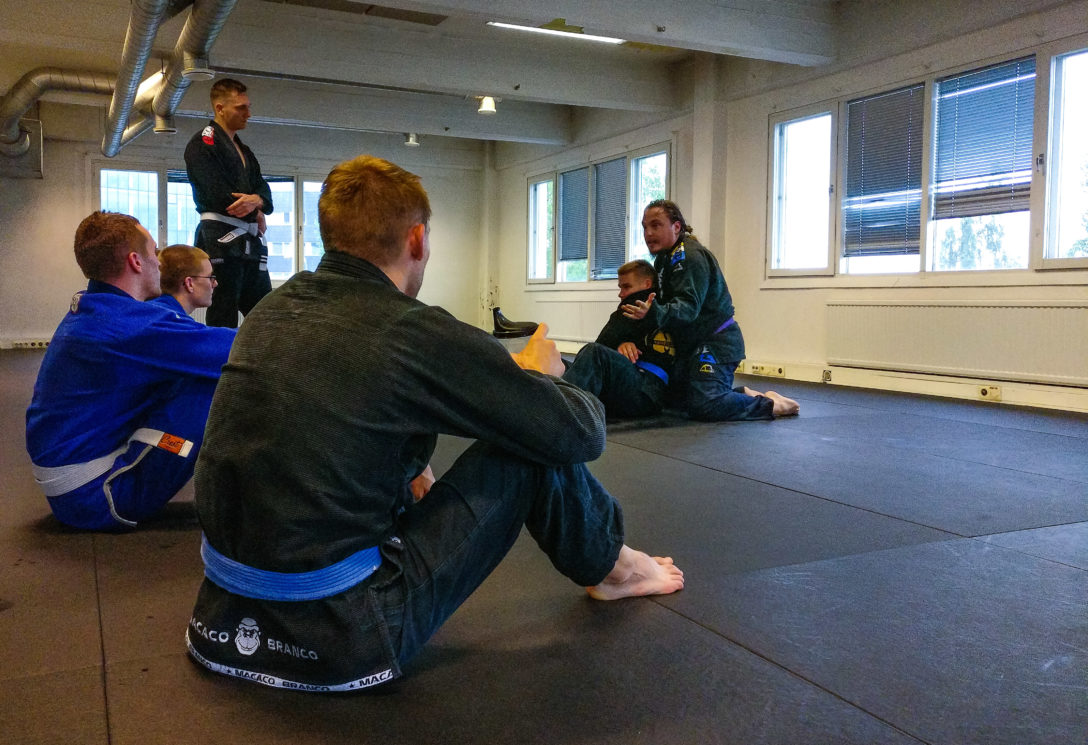 Focus on the fundamentals. Focus on the basics. It’s not a disaster if you do not get all the fine details the first time you’re shown a technique. But also repeat, repeat, repeat. I’ve now done this jiu-jitsu thing for 9 months, and at least SOME basic principles have penetrated my thick skull. Others, I presume, will remain the bane of my existence for years to come.

For every technique, there is a way to counter it. Occasionally a new wondrous move sweeps the BJJ gyms of the globe – sometimes literally – but eventually a somewhat reliable defense to it becomes just as widespread. And if you stick around long enough in BJJ, new ways of doing things become part of your repertoire, like solving an ever-expanding puzzle.

Take last Sunday’s class. Opening an opponent’s turtle position followed by a forward roll followed by an armlock was quite a challenging sequence to master. I said as much to the purple belt I was drilling with.

“You need to see this as an opportunity to being exposed to useful principles, Sohvi. At the very least, take with you the idea that even a solid turtle has its vulnerabilities.”

He had a point. My only way to open a turtle had been shaking the person turtling and hoping they fall on one of their buttocks. Which they probably won’t do, especially if they’ve gone to the Priit Mihkelson school of Brilliant Turtling Around. Now I have at least some more understanding on the matter.

Everyone who understands any BJJ keeps reminding me to keep my elbows closer to my body. I don’t stick my arms out like a scarecrow anymore, but still end up in many undesirable positions every single roll because I haven’t had my arms in. I’m trying to train myself out of this bad habit by only concentrating on my elbows in some rolls. Trying to look like a T-Rex. It’s still very much a work in progress.

But I’ve improved in the past months, people also keep telling me. And I learned some time ago to jump out of my opponent’s reach after I’d opened their closed guard by standing up. Before, I just stayed put and was grabbed by the ankles every time. So maybe there is hope for the elbow problem, too.

3. It’s Not About Winning

If you’re in a tournament, or want to make it as a pro athlete, BJJ might be about wanting to win quite a lot. For me personally, BJJ already means a lot of things, one of which is dealing with difficult situations in a controlled environment. Jiu-jitsu is very similar to normal life in the sense that if you do it a lot, you will fail a lot, especially in the beginning. And a lot of training is about focusing on the task at hand. “It’s like meditation except someone else forces you into it”, a rolling partner said to me in Estonia once. True that. And it can also take years to get really, really good at meditation in its purest forms.

Things is, I have started to think that being mega competitive can even be a hindrance in jiu-jitsu. Especially if you have a string of tournament wins or rounds of dominating others during sparring. Us who learned to fail earlier might have an easier Blue Belt Blues when it’s time to level up. Or maybe not. I’ll only know that I’ll keep turning up to the mat for as long as possible.