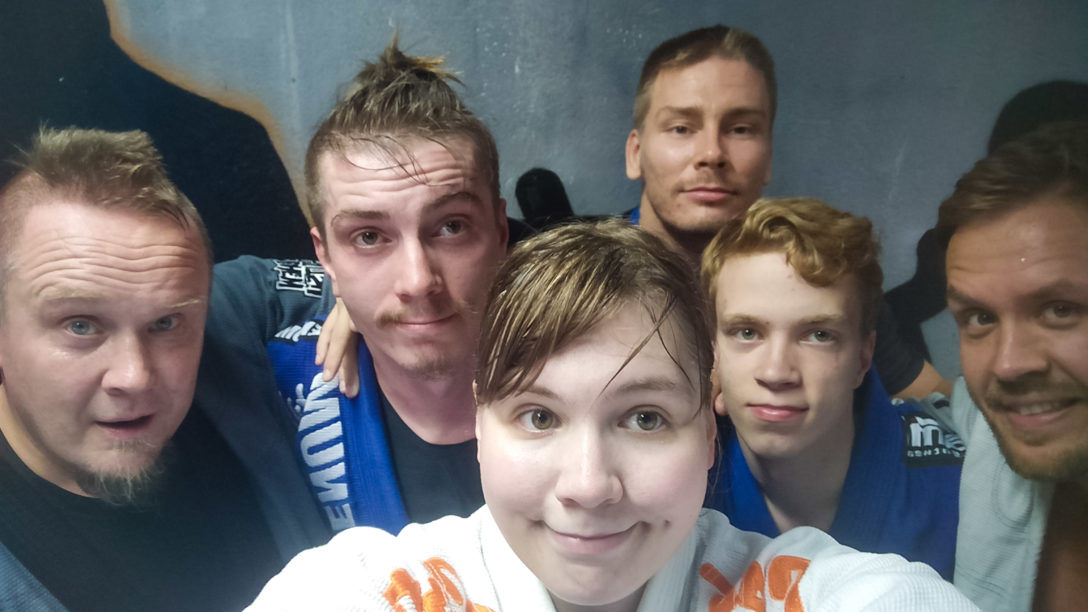 I have been making peace with BJJ’s less glamorous side: physical strain and injuries.

Around 2012, I went to watch a female rugby team practise. The team had made a rad pin-up calendar and wanted to donate part of the money raised by its sales to the campaign for equal marriage in Finland, which I was involved with at the time. So the rugby chicks had invited interested campaign volunteers to watch their practice match.

Rugby includes a lot of tackling, piling on top of other players and people slamming against each other with full force. The rugby players look hard as nails and were decorated with all the colours of the rainbow. The colorful bands around their limbs or strapped across their backs were kinetic tape, which I didn’t yet know existed. I kept looking from one grinning wounded warrior to another and was utterly baffled why anyone would want to do such a rough sport recreationally. I bought some cookies from a bake sale by the field and ate them watching the action, eyes wide with pity and fear. All those poor people getting hurt for fun.

Seven years later, Henkka lands an impressive double-leg takedown on me on the tatami of my home gym, Crest. I forget to tuck my chin in when I land and can hear my poor neck muscles cracking. Henkka has passed my guard in seconds but isn’t speedy enough to armbar me. I manage to escape the attempted submission, but not without my arm aching a bit. It’s already been cracked twice the same week. Henkka does get a choke in however, and I tap. The following day my neck is bruised (and achy). I still have no idea if it was Henkka or some of the other training partners I rolled with the day before. And the next class, it happens again with someone else.

BJJ is, of course, a contact sport. Technique sessions aren’t that taxing for my body, but sparring (the play fighting) definitely is. Especially if the training partner is better at BJJ than me (most people at my gym) or in better physical shape (again, most people there) or really intent at getting a submission in. And sparring often seems to be what wears the body out. Not to mention occasional twisted ankles, punches to the face and kicks to the head. And the black eyes.

Literally every seasoned BJJ practitioner I meet has an anecdote about a part of their body that gives them grief. Someone hurt their back in 2012 and never really recovered. Another has had chronic shoulder pain for 6 years, a third person once tore their pectoralis major (ouch). Knees have been rebuilt and spines realigned. If I stick round long enough, I’m sure my neck will need constant daily maintenance at some point. I love jiu-jitsu. Yet I sometimes wonder if it is worth it, knackering your body for what for most of us is a hobby.

There are many, many resources on how to minimise unnecessary physical strain in BJJ. Neither is it the most risky among martial arts or contact sports. Maybe the physical benefits jiu-jitsu has given me even outweigh the downsides.

I suppose I’m trying to say that if you just want to get in shape, there is a multitude of easier ways to do that. I suspect most of those rare beasts that stick with jiu-jitsu have other reasons to keep turning up to train.

I surely do. I’ll do my best to be able to continue with BJJ for as long as I body will let me.