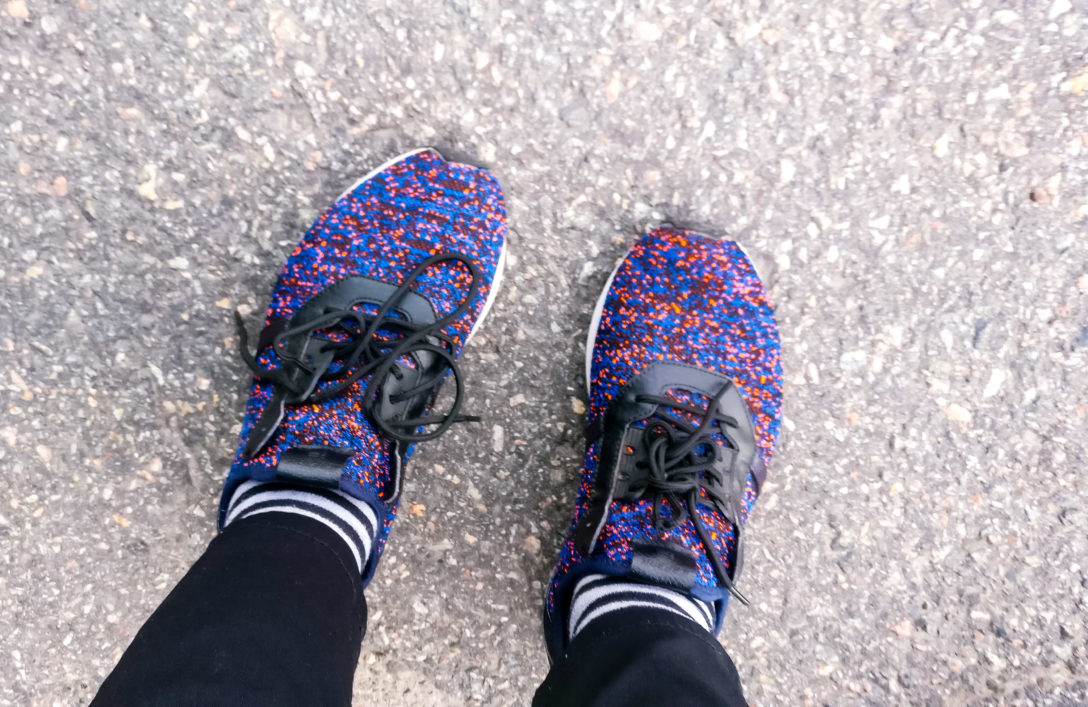 This is the story of a Tuesday and the days after that Tuesday.

I leave work for no-gi class. I would have been on time, but the commuter train I was going to take is cancelled: there’s been “an accident on the tracks”. The next train grinds to a halt between The Central Railway Station and Pasila. And again between Pasila and Käpylä. When I finally run onto the tatami in my new unicorn spats, I’ve missed warm-ups and apologise to the instructor. “I was late because of the trains too, it’s okay.”

This just in: takedowns are hard. Especially the 100 per cent vanilla, everyone-gets-taught-these single and double leg takedowns are so hard for me to get working. And during this class I learn I can’t even sprawl right.

“Sohvi, legs properly backward.” “Sohvi, your giving everything up for free now.” “Sohvi, pelvis to the mat.” Ville the instructor is brisk in his teaching style, but I do appreciate his attention to detail and his uninterest in sugar coating stuff for me.

I fail at everything in positional sparring again. Fuck.

“It’s so annoying how I can’t get any takedowns to work”, I complain to one of the brown belts in the dressing room.
“You’re going to feel like that countless times. It requires either time or a a boatload of reps.”

Thanks for the encouragement, mate. No but really, she is of course right. There are little shortcuts in jiu-jitsu, and there seem to be even less of those for takedowns. If you have done judo or something similar before, you might have an easier time performing them. I probably will either learn eventually or accept that I never will.

The Tuesday gave me very little joy of success and basically made me stare straight into my own inadequacy for 90 minutes. That is frigging exhausting as an experience. I can sympathise with the notion that BJJ is for masochists.

I used to prefer doing things I’m already good at. BJJ is very good at making you okay with tolerating stuff you can’t do yet. And that is why Tuesday doesn’t keep me away from the gym longer than a day. On Wednesday evening, we do armbars from mount, with a technique that includes jamming the opponent’s upper body between your legs at one point. The previous weeks we have been doing similar techniques on Wednesdays, and I am able to follow the general gist of them better this week. I spar every round.

Some weeks ago I was trying to learn the D’arce choke for the first time and was mainly just confused. I kept putting my hands in the wrong positions and not keeping the grip tight enough.  This weeks Friday I’m able to perform the choke correctly. Many times. And the Anaconda choke too. I can’t hit them in sparring, but we have to start somewhere. A former training partner visiting from another gym gets given her blue belt, and I feel very happy for her. She worked very hard for that belt, asked questions and practiced and competed. And oh yeah, the sparring: I have the energy to do it longer than an hour, maybe closer to an hour and an half. Upper belts say nice things about my progress. I crash on the sofa when I get home but can’t regret anything.

If there is a moral to this story, is that 1) you probably start to understand a bit of what’s going on in BJJ if you keep doing it 2) a day where you don’t feel you’ve learned anything does not have to define all of who you are. I’ve got another gym tournament coming up, and I’m broadly fine with the fact I won’t be great at takedowns by then. Let’s see what happens.