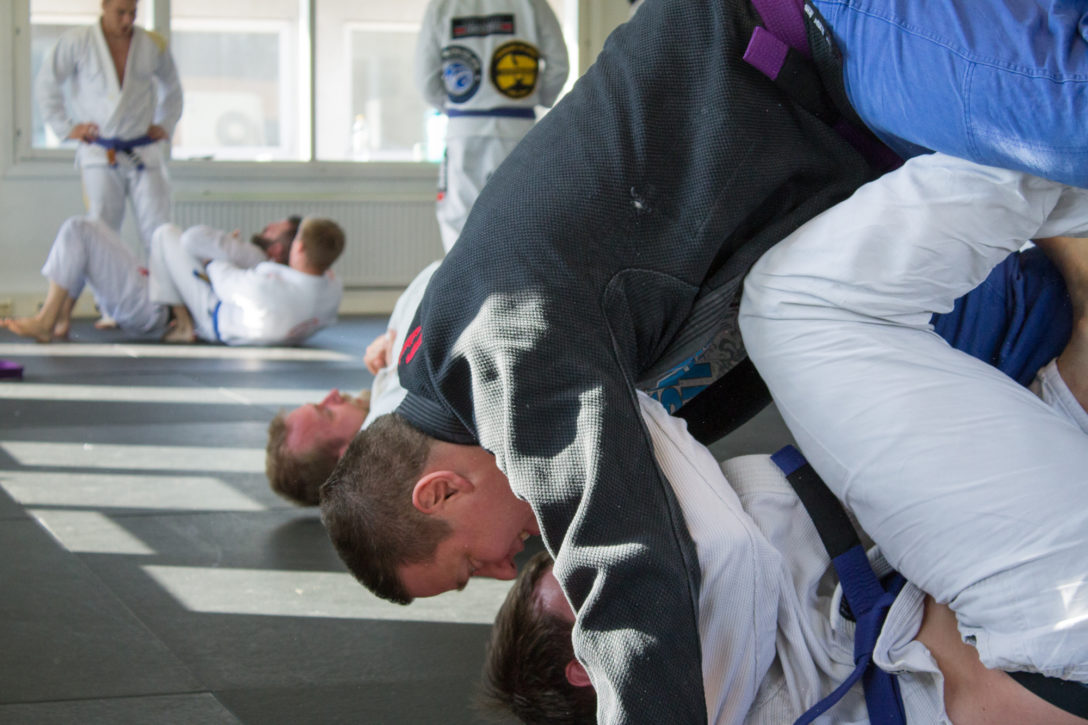 I attended my first graduation on June 20 and felt uncharacteristically touched by symbols again. I also received a stripe for my white belt, which made me feel mostly grateful and a little bit ponderous.

Between Flues & A Borrowed Camera

So for those of you not into martial arts, a graduation is a ceremony where BJJ students are awarded higher-level belts or new stripes on their current belt. The martial arts belt systems are pretty well-popularised (in BJJ the colours are white, blue, purple, brown, and black), but stripes were new to me when I started researching jiu-jitsu in Spring 2018. In simple terms, they are a sort of intermediary recognitions high-level BJJ practitioners hand out to acknowledge a student’s progress at jiu-jitsu. In practice, the recognition often manifests itself as a piece of tape on the student’s belt. 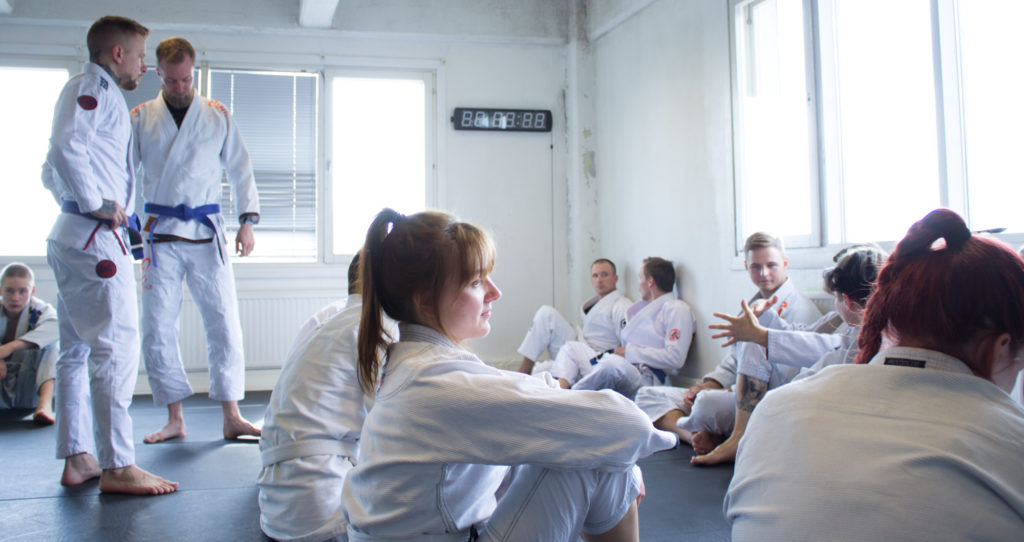 I was excited for our gym’s graduation. I’ve never been big on ceremonies or symbols, but I had already learned that other people receiving recognition causes me great joy. I was generally also curious for what might actually go on at a graduation. I had been ill the graduation week and missed all classes, but as I had invited myself to photograph Thursday’s festivities, I was glad to be feeling better when The Day rolled round.

Feelingstornado with Colours and Stripes

The gym was pretty packed. I wanted to get at least a few decent pictures after Head Coach had summed up the spring term and explained to the newbies what we were actually going to do here. I had plopped myself down next to a friendly white belt and was shooting away when Coach started to read out white belts receiving stripes.

Hang on, I’m called that. I shoved the camera into the white belt’s arms and joined the queue of white belts leading up to Head Coach. A training partner in the queue met my eyes and smiled. I felt mildly incredulous but grateful.

Some time before reaching Head Coach, I started to worry. What if my name hadn’t been called out after all, and everyone would be embarrassed for me thinking I’d receive a stripe? A blue belt said later they had felt exactly the same when their name was called a moment later.

Coach said something about notable progress and wrapped the piece of tape round my belt’s black strip. After we applause from the other students, I was glad to continue photographing. My legs were shaking. 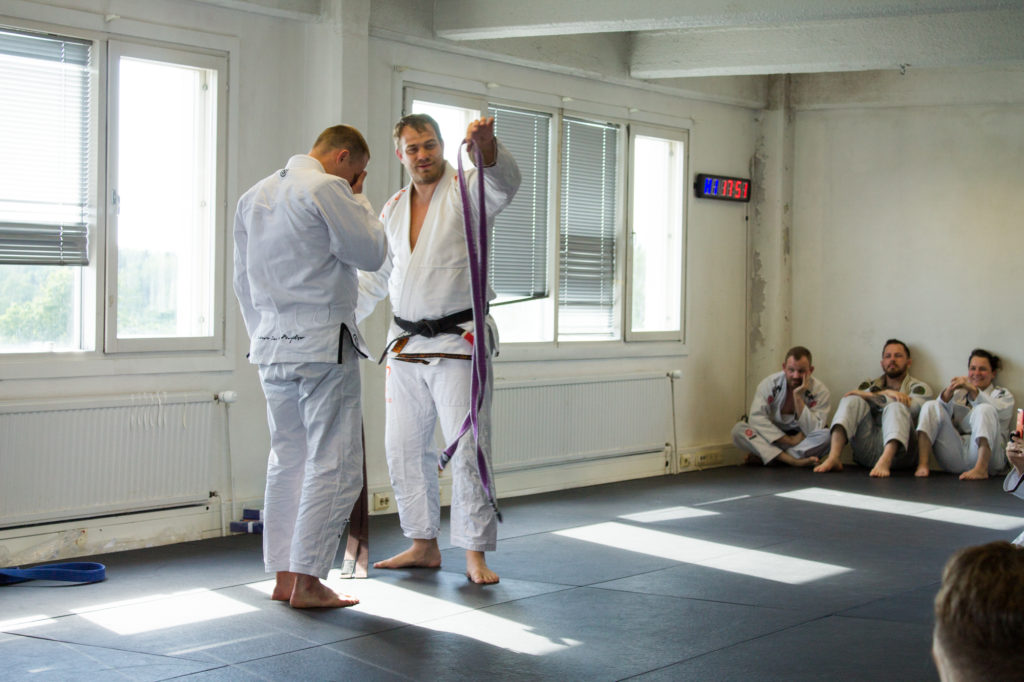 My experiences with compersion, enjoying other people’s joy, has reached unforeseen levels since starting BJJ. Coach had nice things to say about everyone receiving stripes or belts, and I felt happy for the happiness radiating in the room. Especially touching, to me, where the upper belts getting leveled up – Coach has known most of these people for a long time by the sounds of it. I’ve never had much of a passion for teaching, but I can imagine it being rewarding, being able to follow other people’s development close up.

Our gym’s tradition at graduations is that people with new belts are supposed to roll for 45 minutes straight, with opponents changing every minute. I kept creeping round the mat and was even ok with some of the pictures I managed to take. If I had more experience and a better camera, I could have worked with higher shutter speeds, but we all have to start somewhere. 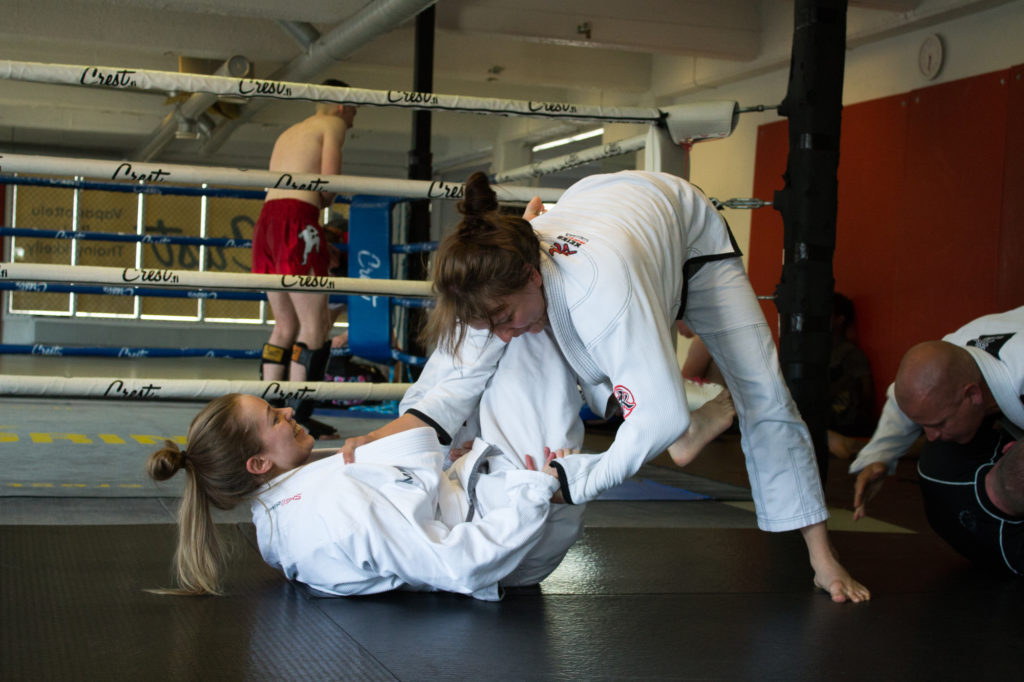 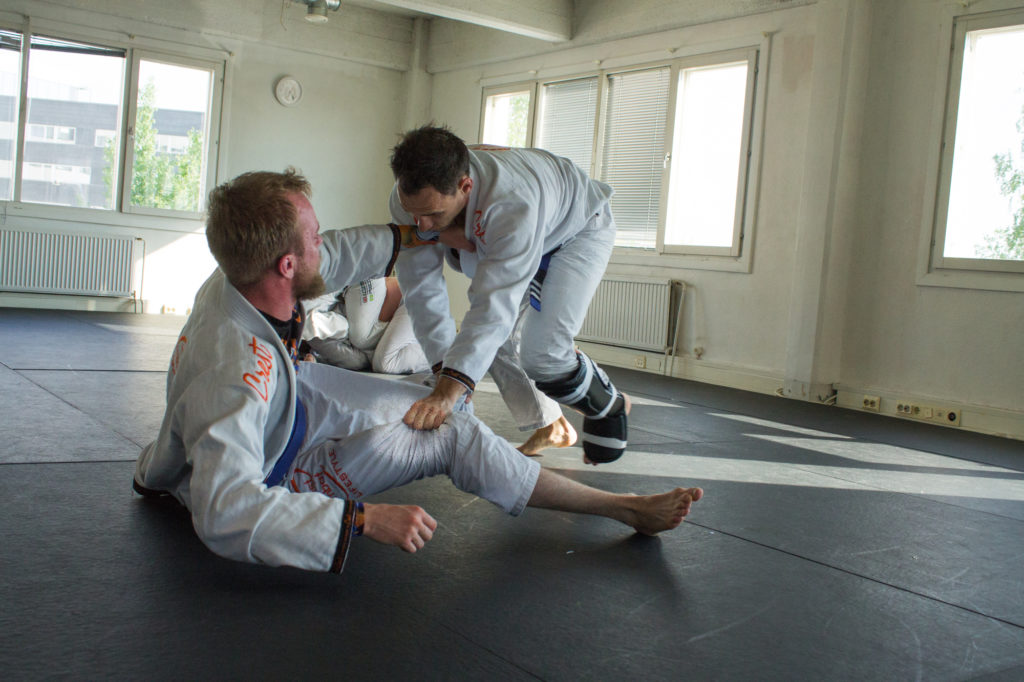 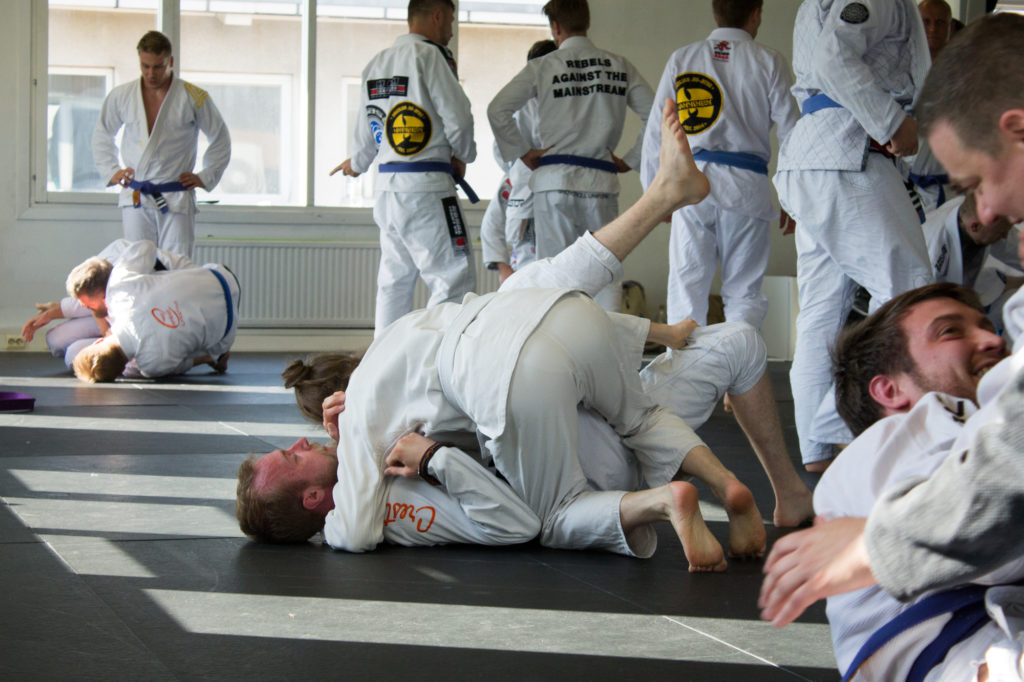 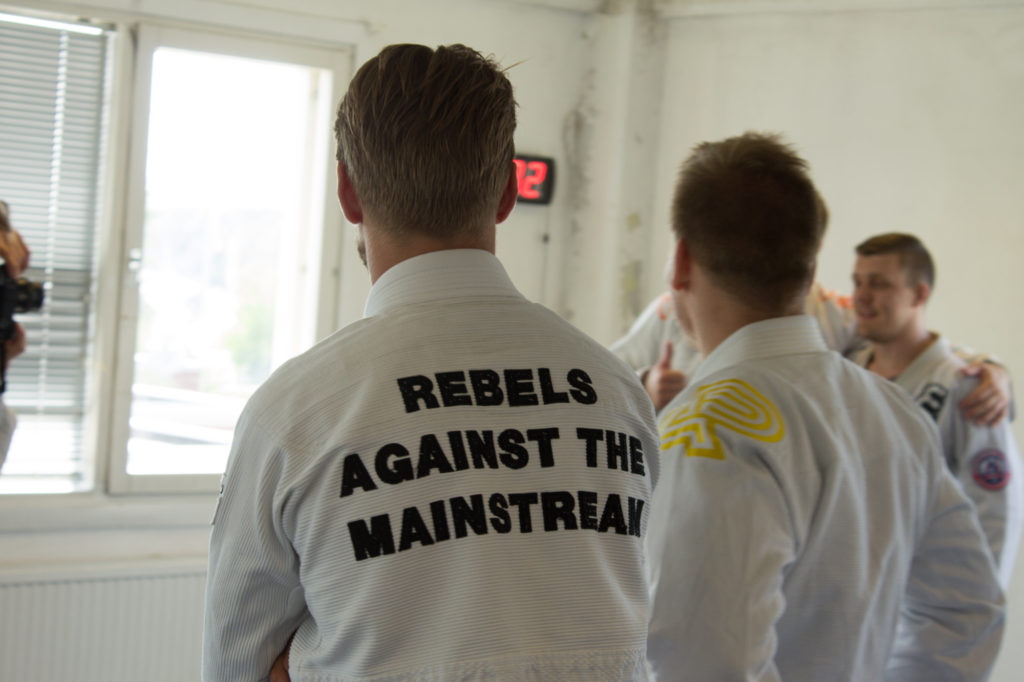 My long-term plan now is to save money so I can buy a proper camera for myself again.

So how do I feel about my new stripe? I said to Coach that I felt very thankful and humbled for the recognition, and he said that it was me who had done the work anyway. I suppose so, although it hadn’t felt like work. Hard for the body and soul occasionally, but not like a drag, or a project. Maybe I hadn’t expected to be awarded a stripe yet because I had subconsciously decided I wasn’t worth one yet. Then again, as we agreed with a friend, such is the system in BJJ that promotions and stripes are a reflection on how you measure up to the standards of your instructors. Students are probably better off if they focus on improving (or just having fun, if that’s what they’re into) and less about second-guessing why they were awarded something or not.

On the other hand, my mum remarked that I can’t call myself a stripeless white belt anymore. She’s right, and I know I have a tendency of underestimating my potential. I know that I was given a piece of tape for being better at BJJ than when I started with it – that, of course, is encouraging. What feels strange is the fact that I have now missed the opportunity to compete as a white belt with no stripes. This is not a real issue, I just realised that apparently I had thought I would. I had this image of myself rocking up to a tournament with a pristine black strip on my belt, losing to someone far smaller than me and letting people think it was no wonder for someone so new. In reality, 1) the difference between no stripes and one stripe isn’t that massive, 2) it doesn’t matter what anyone thinks 3) the only thing different from last week is now I have a stripe and that’s that.

If anything, for me the stripe is a sign that after years of trying different hobbies and forms of exercise,  I seem to have found my thing. If BJJ wasn’t fun, I wouldn’t keep showing up (albeit “just” 3 times a week at the moment). And I didn’t keep showing up, I wouldn’t improve. I got ill again a couple of days after the graduation, which frustrates me somewhat rotten. That unscheduled time off the mat is a frustration to me and not just some extra rest time actually makes me glad. I love having BJJ to miss.