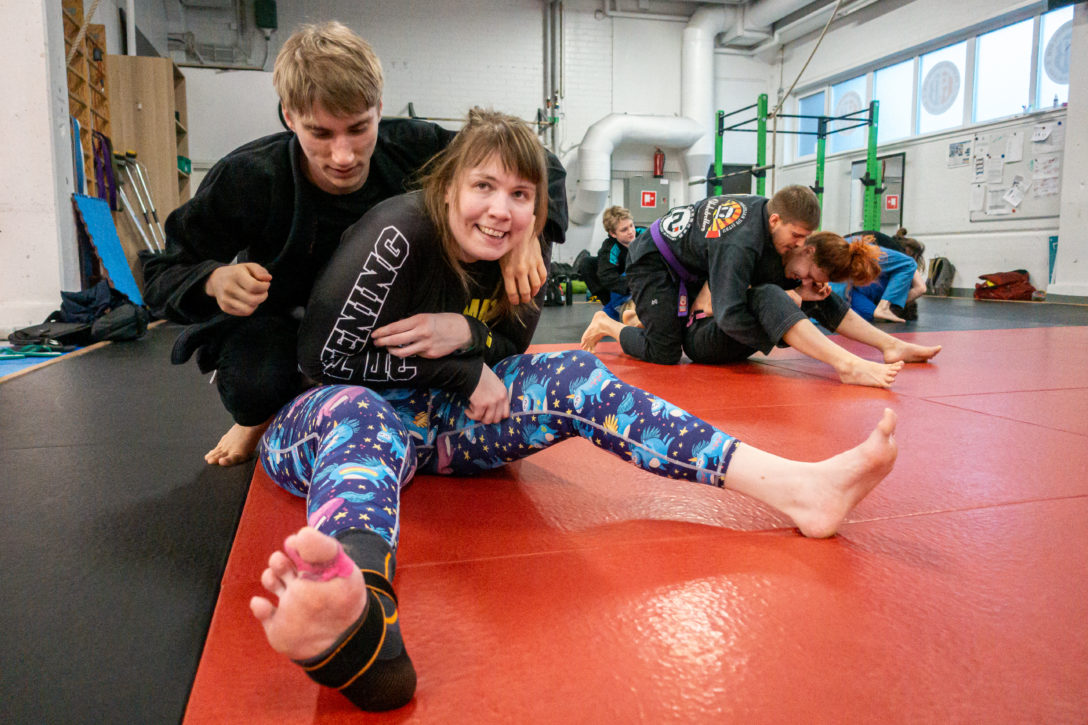 It’s a truth universally acknowledged that frequent sparring is integral to practising BJJ. As is the fact that improving at both concepts and techniques involves a lot of drilling and that a good seminar can really up your game. Before the big C closed gyms for a bit again in my neck of the woods, I managed to return to the mat with a light ankle brace and my zombie big toe all taped up.

It’s been really good to engage with BJJ again, even in a limited capacity. I haven’t done any sparring yet and don’t know when it will be a smart idea. I have however discovered that only doing technique and drilling has some upsides I hadn’t had the chance to appreciate before I encountered them. Yes, really! Here’s what I learned during the weeks of going to classes while still recovering.

Me and Crap Ankle go to Classes

The first class I did after letting my ankle bones grow back wasn’t my finest hour. We learned collar chokes from side control that made sense in theory, but I found it very difficult to finish the choke. Even with extra attention from the instructor, only about 10 % of them hit home. Of course, my training partner was both a) brand new and b) a former judoka, AND managed to finish every single one. Still, it wasn’t the end of the world. I was back to training. Since that day, I’ve also been re-introduced to inelegant pressure passes and windshield wipers.

My ankle has survived light and medium intensity warm-ups and technique classes relatively well. Even with techniques that have required weight-bearing, a mild, dull ache at the very end is at bad as it has been. Psychologically, I have felt it very reassuring that I’m still capable of moving on the mat. The best part of not being able to spar yet is probably better concentration on the actual technique part of the class. I don’t take rolling too seriously, but sometimes in uninjured times my thoughts already drift to it prematurely. When I can’t ponder how I’m going to use the move taught during the rounds, I might remain a bit more focused. (Of course, if the training partner is willing, some minutes of class might still be spent shooting the shit or laughing at my own performance.)

Me and Crap Ankle go to Seminars

In December 2021, I attended two seminars taught by two very different BJJ practitioners. After last year’s very overdone discussions on misuse of power in this sport, I’m even less impressed by Big Names rolling into town than before. That doesn’t mean I’m not into learning from those of them that have teaching skillz. Josh Hinger from being-a-successful-black-belt-competitor fame and podcasting fame popped by at our gym for a Sunday afternoon. His attention to detail while describing the techniques shown was very commendable. I got my first tastes at setting up any kind of monoplata during this seminar, so I finally have an alternative to armbars from s-mount. Three-year white belt me also finally understood that guillotines are not finished by trying to separate the head from the body; it’s more about curling into a ball around the opponent. Oops. And Josh’s objectively very effective butterfly sweeps didn’t fly this time: I just couldn’t flip Outi over, even when we’d done butterfly sweeps in class the same week. Double oops.

The seminar at our gym was the first seminar I’d attended since the pandemic started. As I was on a roll, me and my COVID-vaccine certificate decided that spending three days absorbing parts of Priit Mihkelson’s defense system at GB Gym sounded like fun.

Priit has loomed at the edges of my BJJ life since I started grappling. My social circle includes his former and current students, and I used to visit his former gym in the good old non-pandemic times. He’s gained name for himself specialising in the defensive side of BJJ and has been building an ever-evolving system around it for years now. Priit also seems to have a realistic view of what people are actually capable of learning during a seminar. He doesn’t really teach techniques, more positions and concepts. That worked for me at least: I attended 6 out of the 8 seminar hours and mainly just learned about Priit’s version of the turtle and the positions known as Panda and Running Man. I did not become overwhelmed by information at any point, so this approach seems to be my thing.

Priit has a sound point about defenses in BJJ: we’re told they are important to learn but in some schools they are still a bit undertaught. Then practitioners might get the wrongful impressions that their guard passes, sweeps or submissions are stellar. Instead, the opponents might just be bad at countering attacks. He does not intend to create stallers, but give people a couple of seconds of time to think what their next move should be. I can get behind that.

As I’m a bit of a Turtle Person, I am now happy to say this seminar weekend improved my turtle significantly. It was also a joy to see some BJJ people I hadn’t lied eyes upon for some time because of the plague. Don’t know when my next seminar will be, but this was a good one.

Me and Crap Ankle go Drilling

Techniques rarely sink in with me during a technique-based seminar. So me and some gym mates used a December’s Open Mat time to drill Josh Hinger’s seminar teachings. I was massive and clumsy and had loads of questions. Luckily two of the people present were astute blue belts, so I found some more missing details my monoplata needed.

Not being in sparring form is some blessing in disguise as slow learner me could really do some more drilling. Even with the open mat rounds going on at the other end of the gym, I could not be lured away from getting some reps in.

The upsides of doing BJJ without sparring definitely are 1) having more energy to learn new things 2) not becoming too detached from the sport. The largest downside is that my cardio has not been great since I fractured my ankle in September. 😀 Especially now with even Boring Gyms closed for a bit, I suppose I must do a bit more home HIIT’s or whatever.