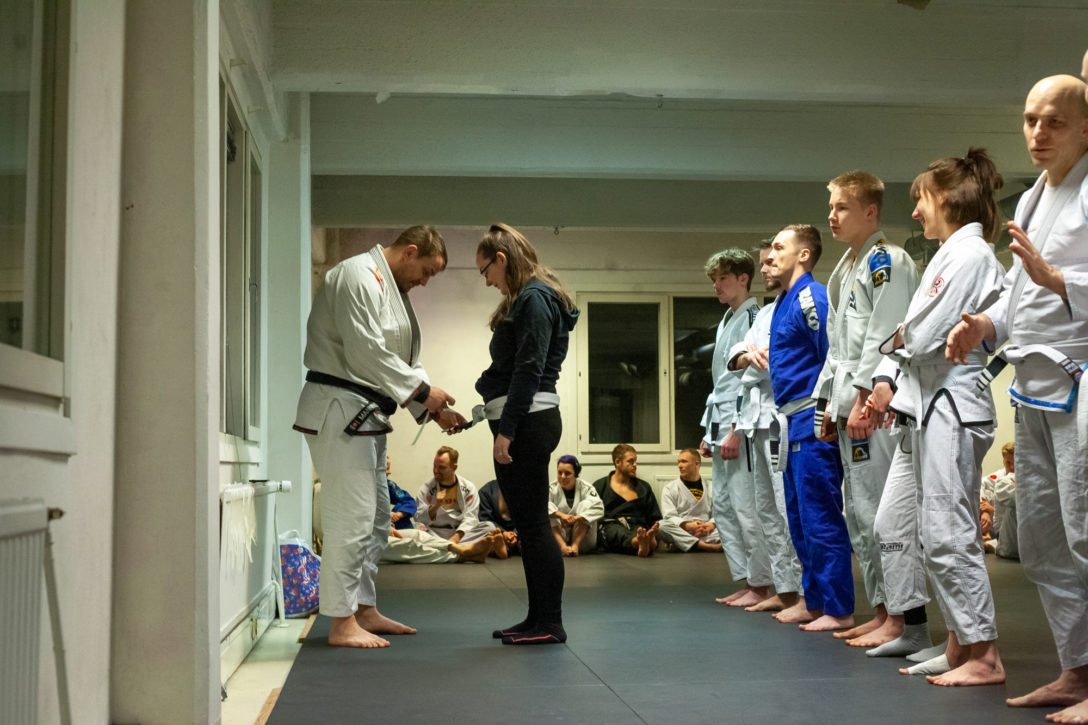 I have felt a bit mentally distracted about an upcoming job change and a health check-up I’m due this Spring. Jiu-jitsu is no substitute for therapy, but it provide excellent opportunities for mental grounding. Here are some moments from the turn of this year that were important to me.

The gym’s Christmas Party was preceded by the graduation, I took pictures again and got some good feedback on them. That made me glad.

After we’d eaten our Christmas sushi, I lay on my back on the mat and looked up. “I think I know this ceiling better than any other in the world. Except maybe my bedroom ceiling at home”, I said out loud and got a semi-amused snort from one or two people. But it was true. Especially in late Autumn, when I went through a period when I was always stuck under someone’s side control or mount. Sometimes under people much smaller than me.

It felt weirdly nice, to have a ceiling you know well.

After Christmas at my Mother’s, I headed 400 kilometres North-East to join my spouse at his childhood home. Kuopio meant visiting Gladiator Factory, where people don’t just stop training for some silly thing like the holiday season. I came to the Open Mat in my 3D Treening rash guard, and Tiina and Maaria from Imatra had done the same. They agreed to have a photo taken, two small but fierce women on both sides of me, the giant.

I love this about BJJ: that I could visit and fall a bit in love with a gym in Tallinn, Estonia, and the next winter run into other people who also enjoyed their time there.

“You Roll Better than you Drill.”

I get this comment from a helpful upper belt at Gladiator Factory. I had partnered up with them to learn a guard pass that confused all the sense out of me. It happens way too often still for my liking: I put my limbs in the opposite position I should put them, straight up forget what I’m supposed to be doing in a particular sequence, and other fun stuff. There are times when I have pondered if I actually have some sort of perceptual difficulty, so gleefully wrong do I get techniques every now and then. Then again, maybe I’m just a white belt, I’d been telling myself.

“Maybe you overthink during drilling”, the upper belt suggested. “You could try to do the technique with a bit more intuition and see how it goes.”

They may not be wrong. However, when I turn down the thinking during drilling I tend to perform even worse. Let’s see how this turns out. Then again, at the very least that upper belt deemed my rolling better than my drilling, as in the rolling is better than something. Individual opinions are individual opinions of course, but maybe I have been getting better.

Work Your Weaknesses and Let Others Work Too

I got feedback for the first time that I should be less intense during rolling with a smaller opponent. I was both very glad for the heads-up and slightly embarrassed for not realising it myself. I spent a bit of time thinking about it and concluded that I hadn’t really understood my own mild improvement in BJJ. Don’t get me wrong, I’m not good at it by any standards. But when I started, I was so bad and out of shape that everyone could overpower me. I was routinely submitted by people who weigh 40 kilos less than me. Now that I’ve improved enough to get a sense of accomplishment of something – being able to put pressure on my opponent, pulling off a half-decent Americana – I could take time this year to work on the stuff that doesn’t come naturally to me. Like guard retention and sweeps, all the sweeps. But I’ll write about my goals for 2020 another time.