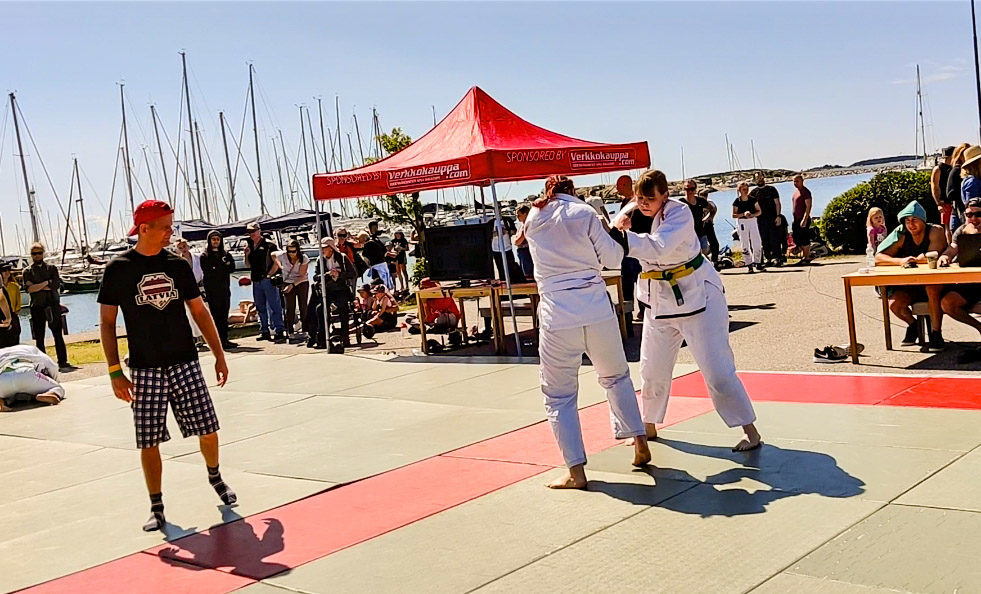 I did it: I competed in a BJJ tournament for the first time ever. The BJJ Summer Fight 2019 was also my first sports competition of any kind ever, at the tender age of 29. Here’s what I learned.

First things first: I lost both of my matches. Tragicomically I also lost them in identical ways: my opponents mounted me after taking me down and choked me. And no wonder they did! I was not able to do much during the matches I had planned, but learned a ton regardless.

My genuine goals for competing the first time were to 1) get through the psychological stress of the situation without falling apart 2) not get disqualified by pulling an illegal move or something unsportshumanlike like running away from my opponent 3) see if there was anything worthwhile for me in this whole competing thing. Especially point 3 was the reason I wanted to compete now, and not get better at BJJ first and then compete.

Lets’s face it: I’m still technically very poor at jiu-jitsu. Improving constantly, but not good by any expert’s standard. The morning of the competition, I didn’t know a single choke yet (even though I’ve been taught some and shown some more), expect for the RNC which doesn’t help at a gi tournament. Which this tournament was. Almost nothing I had been taught about takedowns had stuck, my mount escapes were abysmal, and I still gave easy access to my arms (a habit I haven’t yet unlearned). I’m not trying to put myself down, rather to encourage other people. You do not have to get good at BJJ before competing in BJJ (at least as a white belt). Sure, you might have a better time if you know at least something, but overthinking is not recommended. Talk to your coach if you want to compete. It’s the advice I was given when I started to think about competing, and it was an excellent one.

“Is it okay if I want to compete without having a burning desire to win? I mean, is it okay if my week is not ruined by a loss?” I asked Head Coach one evening after no-gi class. Some of my gym’s more competitive people had lamented the possibility of losing some upcoming important matches. I wasn’t sure if I had it in me to care that much about my outcomes.

“That’s fine by me”, he said. “After all, you’re gonna be there to chase your own goals, first and foremost.”

This is one of the many reasons I like my Head Coach. The dude has a sense of perspective.

I did very little extra to prepare for the competition, especially as I had been ill for two weeks of June. I wrote out a rudimentary game plan and attended my first competition class at our gym. Otherwise I refused to stress about it too much at this point in my hobby.

For those worried about my spinal cord injury, I did write to my neurosurgeon about what I was planning to do beforehand. His entire response: “Hi, you can do the sport and compete by me. Have a nice summer!” So that was good too.

Then the actual day rolled round and it was almost crunch time. The Summer Fight is an unusual BJJ tournament: it is held outdoors, weather permitting. And this year is what warm and sunny. My family had come to watch me make my mat debut because that’s the sort of family we are. I got a lift to the tournament from my mum. Gym mates were very nice to me before my match. I was coached in warm-ups, my water bottle was filled for me, and medical tape was produced to wrap my fingers. I had gotten nervous a couple of days before the match, up until then I had been perfectly calm. The hour before the first match was less horrid than the hour before my brain surgery but still unnerving. Most of my anxiety was about the possibility of getting injured, not about losing or having to fight someone in front of an audience. There is always an injury risk in combat sports, especially in competition where adrenaline and tenaciousness can mean sprained limbs, concussions, dislocated shoulders and knees or even worse. And yet I still wanted to know what it felt like to compete.

My opponent was strong and sturdy and had already won medals. “Hi”, she said to me, then the match began and we grabbed each others collars.

In theory, I knew a takedown or two. In reality, I couldn’t get any of them to work and after about a minute of pushing around, Maija made me fall to my knees. In a flash she had sat on me and choked me out. For the one minute and 37 seconds the match lasted, I functioned in some dream-like state where I felt both very, very alive and very disorientated. As the opponent’s hand was raised, I felt mostly relief for not being hurt, but also elation that I had just competed. Hell yes! Losing bothered me very little, although it would of course had been great to win.

Second Ever, Or, Tenacious Dummy

Marika came to show me the proper way to do a single leg takedown before the bronze fight I still had to go through. “You have mass on you, use it.” Fair point. Before the fight, I got confused by the screen predicting the right mat for a match and nearly missed the whole thing. And the judge had to tie the yellow-green differentation belt around me because I still forget the Hollywood Knot in places I really could use it. Ville, our gym’s brown belt, had sat by the mat to yell instructions at me for the match. Yes, in BJJ matches your coach or whoever can give you instructions. It’s not just your own wit you can follow.

Tiia took me down a lot quicker than the first opponent had. She threw me over her shoulder in a way that according to a gym mate would have been easy to counter. She mounted me as well, and I could hear Ville shouting something about a mount escape I didn’t manage to replicate.

Tiia, another strong opponent, got her choke in. Miraculously, I managed to hear Ville’s instructions about defending the ezekiel and managed to hang on for two minutes before I had to tap! By then, I couldn’t breath at all anymore, so might as well.

“Don’t try to stand up just yet”, the judge said, his arm on my shoulder. “You’re blue in the face.”

“You were so tenacious!” Tiia the opponent said after being declared the winner. She sounded like she admired my spirit. 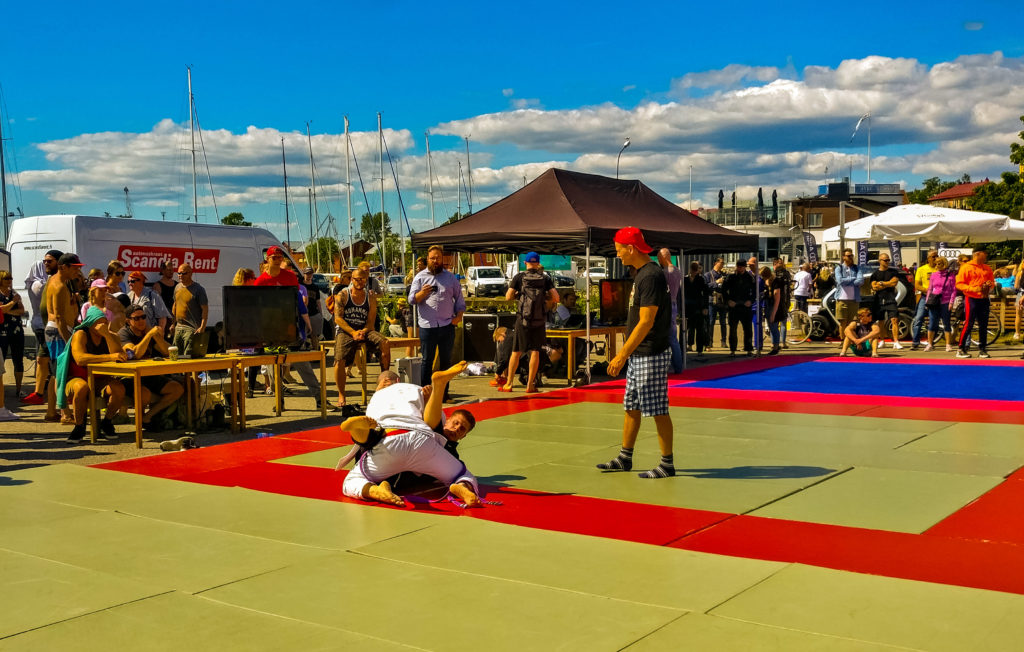 Goals I Ticked Off

Like I geeked out on Instagram the same day, I reached a bunch of my goals at the competition.

I didn’t die or get injured. I didn’t panic. I wasn’t disqualified and didn’t ignore warmups. I was able to follow my cornerperson’s (Ville) instructions to an extent. I didn’t vomit on the mat or cry or make noises during the matches. I felt nervous about competing and yet I competed.

Also, I competed as a disabled person in a competition against presumed able-bodied people! I did my best.

Since the competition, Ville has shown me an economical way to escape mount, and I have been training takedowns in another competition class. Competing felt intense but cool, and I want to feel like that again. I’m planning to compete a couple of times during the autumn, and to get better at jiu-jitsu. All in all, I didn’t know losing would feel this rewarding, motivating and empowering.