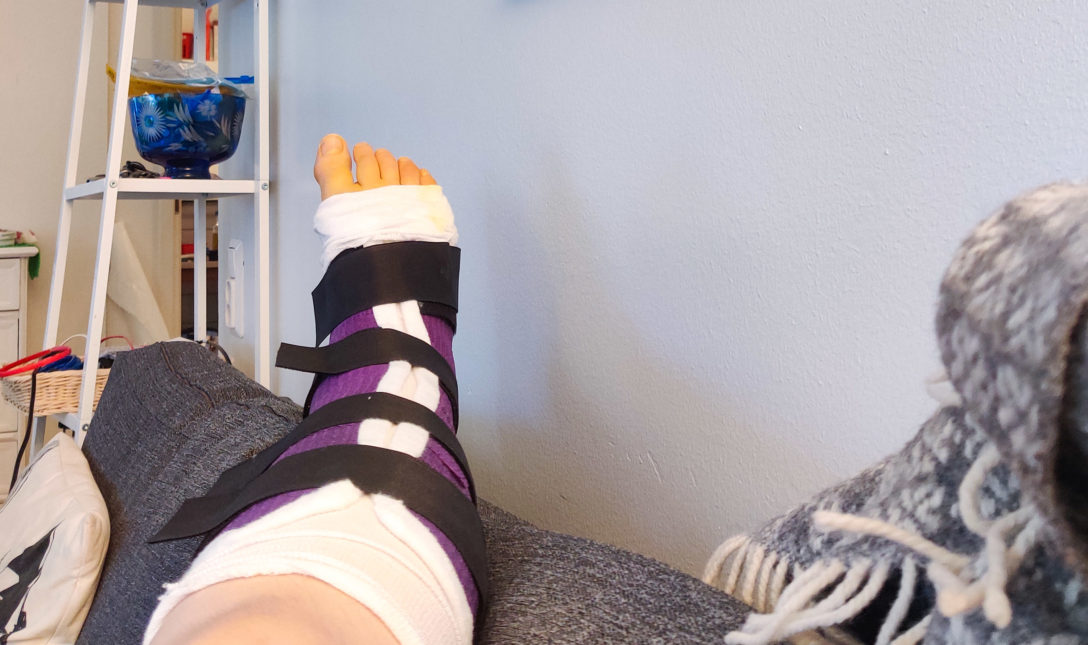 I didn’t have time to write for a while: I was too busy training and was commended on my progress. Even better: I had noticed it myself that I had become slightly less horrible at some of my weak points. My guard had become slightly more difficult to pass, for one. Now I finally have time, as I’m not allowed to move my right leg until November.

I don’t remember what happened. Joni said it was a take-down gone wrong, but it might have been a half-sitting guard pass gone wrong. I was too tired, too distracted by the tiredness, and incapable of saying I needed to go slower. Several small moves came together in the worst possible way. I tried to defend whatever-it-was that was happening. Then my leg made a literal CRACK sound universally known as Bad News in gyms all around the globe, I yelled, and fell down. Simultaneously, everyone else both stopped and sprung into action.

Joonas held my leg in his lap, his own legs probably going numb in the progress. Ice was fetched. Outi and Leila held my hands, as did Jonas With One O at some point. Outi collected my stuff from the changing room. Joni called the ambulance and Sampsa went to reception to guide the emergency service to our training area. Leila went to call my partner  who showed up after the ambulance, he looked out of place in ordinary clothes amongst the gis. It’s one of my favourite things about him, that BJJ isn’t for him. His knees are bad enough as it is.

When I lay on the mat with a leg pointing in all the wrong directions, I cried. Mostly out of mental pain: the helplessness I felt threw me right back into 2016 and having to trust my literal life in the hands of modern medicine and the colourful crew of people who serve it. Bodies really do remember. Even benign brain tumours are bad news if they are in the wrong place. I went back into the zone of knowing that something was really very wrong with me, without knowing what exactly. I’ve worked on that pain a lot but what can you say, nothing like real pain to make you triggered as fuck.

Guess whose ankle is probably broken? I wrote to Laura when I was waiting for the x-ray results in Töölö hospital. Laura is the reason I started BJJ and I honestly felt a bit silly I had to model her in this too. She broke her leg as a white belt, at a tournament. I was slightly morbidly amused when the doctor came and told me that I had scored two ankle fractures and one in my fibula. Leg fractures aren’t a common BJJ injury, so of course I had to go triple fuck up my leg during an ordinary class. Really good look.

Hospital was, like it mostly is, a lot of sitting around with some more exciting action scenes. Between Tuesday and Thursday night, I had to stay in bed with my broken leg in a flimsy temporary cast while we waited for optimal surgery conditions. One of the fractures was so bad it had to happen, but the swelling had to go down first. After having my brainstem scratched and head drilled at 26, being told I needed orthopedic surgery was psychologically like a walk in the park (in a wheelchair). I suppose when it comes to my body, informed consent and some sort of empowerment shit are my fuel. I was not very nervous about the surgery at all. Just really wanted to get it over with.

I was allowed to choose if I was awake or sedated during the surgery. I chose the former. Some people said they couldn’t do the same, but the post-craniotomy crogginess of 2016 had not impressed me. And the intubation tube had really hurt my throat. Plus, being put to sleep is always a strain on the body, and I felt like we had already been through enough. If I could take it, I would take it aware, although somewhat doped.

Two orthopedic surgeons talked to each other about restaurants recommendations and fishing while they hammered at my leg. The theatre nurse was a former BJJ practitioner. I felt the surgeons literally pulling at the bones in my broken foot to align them, and that was the freakiest part in the whole thing. I got a headache during the surgery, probably from the tension or bad neck positioning. I wasn’t allowed any more pain killers so just went with breathing for a bit. It got better.

I was allowed home the day after the surgery, and I was very happy for that.

Now I’m at home with a rollator and a purple cast (got to pick the colour myself). My partner has his own crutches due to Bad Knees so I hop around with them too. Can’t recommend breaking a leg, I have some healing and rehab to do until I can do the pyjama murder simulation yoga again. I’m still happy for the good (almost free) healthcare, both training partners and professionals who aided me when I got hurt and the fact I can do my job without my legs. As I know have time, I might even get some blog topics written up this Autumn. They will probably be about progress when you aren’t used to it & the importance of non-turbo sparring & accommodating trans people in BJJ.

The day I publish this, it’s my 14th day in the cast. I realise there is a lot of work ahead before ordinary BJJ is a good idea again, but I’ll get there. When you’ve already had your big break, what’s the worst that can happen?