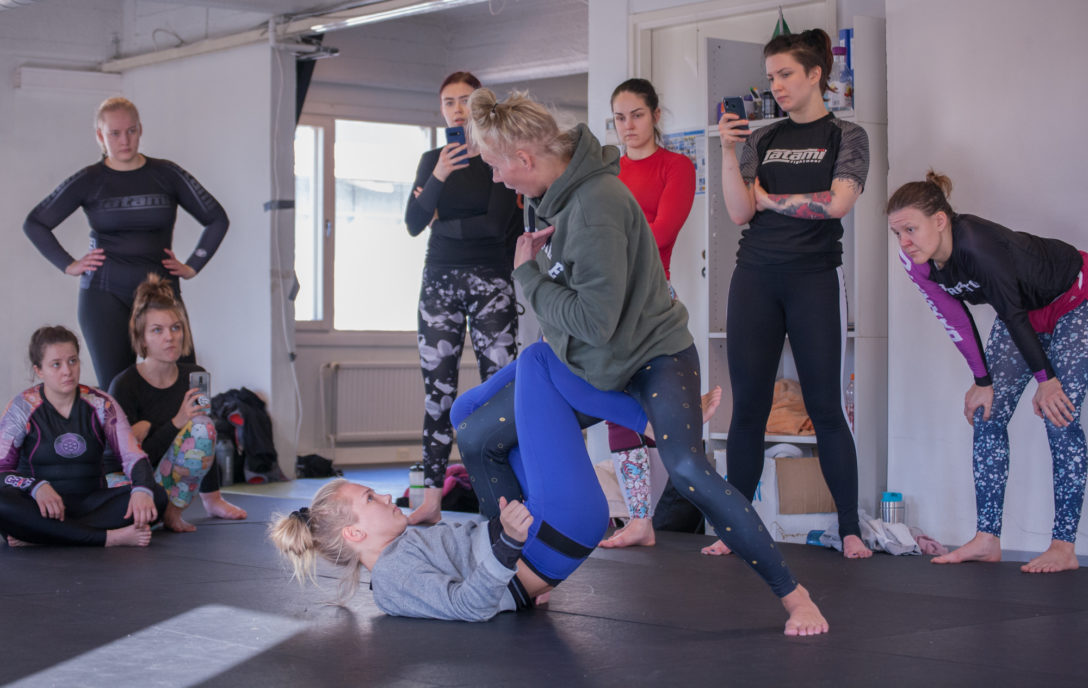 After returning to the mat having survived the latest flu and a new iron supplement prescription under my belt, I decided to try the grown-up thing of not training too hard right away. And Elvira Karppinen came to teach a seminar all about leg locks for women (and me, I still don’t mind being lumped in with the chicks when I have to pick a side).

I made the decision to train semi-light post-flu.Uhm, I trained four times the first week I returned to the mat. But I either skipped sparring or didn’t roll all rounds. That probably contributed to being less knackered and being able to squeeze in that many sessions. I was also irresponsible enough to train through one migraine aura. Can’t really recommend that, learning deep half sweeps with vision disturbances can be a bit unproductive.

But Women’s Class (which I sometimes attend as the massive non-binary I am) had a nice attendance my first healthy (for me) week. That felt nice.

My leg lock knowledge is very limited. I’d only done a handful of classes where they were a thing previously. And the only time I’d not been left utterly baffled was a class at my own gym, as instructor Joni is good at explaining things to me like I’m four. Elvira Karppinen had just won bronze at The ADCC when she came to teach at Crest, so I figured this could be a good opportunity to learn some new school stuff. Even if I never become a big leg locker, I want at least to understand them a bit better.

The seminar was logically structured, I felt. On Saturday, we went through positions that serve well for leg locks, as well as sweeping a standing opponent with one’s legs. All of the positions had names, most of which were totally novel for me. I should now technically be able to know my ashi garami from my honey hole but please don’t do a drill about that with me anytime soon. On Sunday, we proceeded to applying submissions from the positions we had been learning and also did a session on defending oneself from leg lock attempts.

I was often very confused during the seminar, leg locks can still feel like I have to squeeze an octopus into a plastic bag. Luckily both Elvira and her assistant Milla were very hands-on, ready to elaborate on details or to jump in to show one member of a drilling pair what was supposed to happen in a certain technique. I also got to train with two people not from my own gym this seminar day, that was delightful. I like my training partners, but new women-presenting people are always a pleasure to meet in a sport that still appears pretty male. And I learned the sweep where I start sitting and my partner standing (from shin-to-shin guard).

As a white belt, I try not to beat myself up for not learning all techniques to a t the first time I’m exposed to them. I, ahem, attempt to try my best of course, but some stuff needs time to stick. I think that to me, this seminar was very, very helpful for pinpointing some general principles about leg locks:

I did get into a slight information overload by the end so 6 hours of leg locks was enough for me this time. But I’ll write down the names of the techniques we were taught and return to them when I have the brain space again.