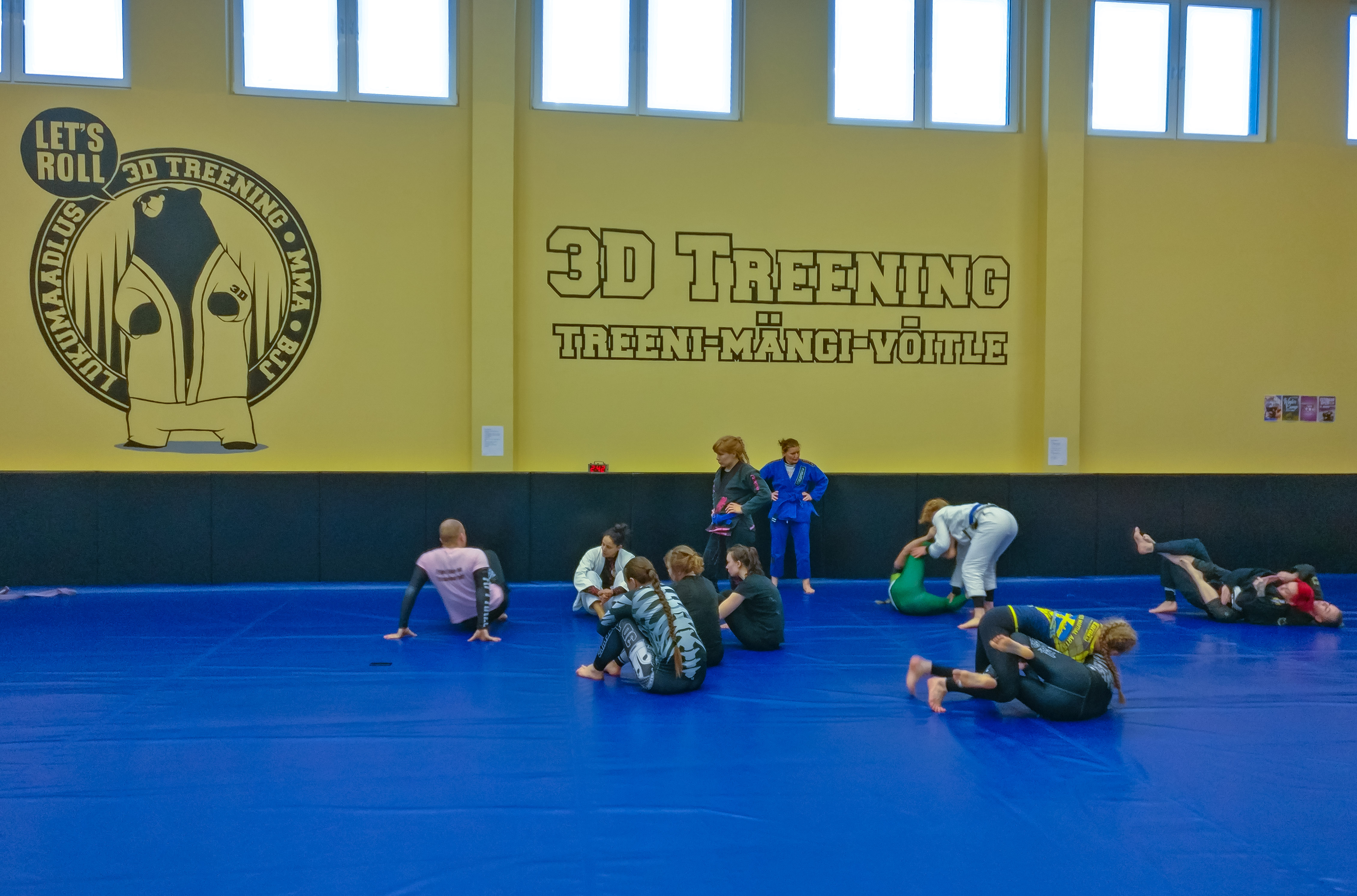 After three months of doing BJJ, I went and attended the third Estonian Women Only Jiu-Jitsu Camp. I regret nothing.

You’ve changed, old friends might say. Have you started to think you’re a woman now? Nope, still non-binary. However, as I am frequently mistaken for female, definitely do not identify as a man, and am categorised in the “F” box on all legal correspondence, I felt it would not be rude to join in. But why there and why now?

The short version is that I’d heard good things about the gym hosting the camp (3D treening), was somewhat familiar with Estonia thanks to my boyfriend’s monomania with the country, wanted to support Estonian BJJ Girls and knew one of the organisers a bit. I signed up in December 2018 before I’d have the chance to think about my decision too much.

Camp was brilliant! Two days of classes, sparring, competition anecdotes, injury stories and possibilities to look a bit further into my own soul. 60 people had signed up (so 1 me and 59 women I presume), an amazing number. Mariel, who trains at 3D Treening, took this brilliant picture of participants lining the mat. Lucky that my camera is (still) being repaired, otherwise I would have been tempted to shoot at the event myself. Instead I did my best to concentrate on the programme.

Jass Murutalu is many things. At the camp he was responsible for two mobility training sessions. Jass’ NinjaYoga – to my social justice warrior self the name is culturally a bit meh but there we go – felt very effective and in parts positively horrible. The best part of some stretches was the lovely reward of them ending after what felt like a decade. Have you ever tried to do the splits against a wall when your legs won’t bend over a 150 degree angle? Good, you shouldn’t. Jokes against, I should be doing more mobility training. Our gym doesn’t offer classes for that, so I’ll try YouTube I guess. But if you are in Estonia and in need of personal training and mobility lessons, Jass is your man, many say.

Liisi Vaht and me Failing at Armbars

I’d already seen this European Champion compete in August 2018, when I went to check out the No-Gi Finnish Open. I wasn’t training back in August yet, but wanted to find out if this BJJ thing would be for me. Liisi competing looked more like watching a frenzied giant weasel spin around, and I mean that in the holy-hell-can-a-human-being-move-like-that-way.

This class taught me I 1) cannot put pressure on another person’s armpit 2) do not know the Kimura grip by heart. Oh joy.

Kadi Külasalu and me Failing at the De La Riva

I also watched Külasalu compete at the No-Gi Finnish Open 2018 and got quite a snazzy picture of it. The best part of her class was me finally understanding what the fuck a De La Riva sweep is. Kadi is also a really friendly blue belt at Voimla in Tartu, who didn’t freak out a) when I sent her that pic I took on Instagram b) about the prospect of me visiting the gym when I’m in Tartu in March.

This class also taught me I can do a De La Riva but tend to fall straight into my opponent’s closed guard. More practice is still required.

Jane Soodla and me Failing at Leglocks

Jane is to leglocks what Liisi is to armbars: a force to be reckoned with. Back home, my leglock-savvy training partners have just confused me, so now I have a bit more understanding on how the whole thing is supposed to work.

This class taught me how to place my legs correctly in an x-guard. The rest will have to wait until I have mental energy to absorb more information.

Mihkelson is Head Coach at 3D Treening and internationally famous for his commitment to developing both BJJ as a sport and teaching methods in coaching. I’d already let him teach me to keep my toes on the mat from this video and heard about his no-nonsense personality. I wasn’t exactly star-struck, but his class did feel a bit like meeting a minor celebrity.

Priit divulged the basics of his armbar escape techniques, and I was blown away. Had no idea you could escape armbars without severing your arm.  Priit did remind us that his classes usually drill armbar escapes for more than 10 hours, so we just got a snippet. But the techniques are definitely worth drilling more back home.

Priit has a charming way of saying “Try and fail. Then try again, fail better.” And when I couldn’t understand what he was talking about at one point, he just went and armbarred me himself. I hope it was for educational purposes and not because he was annoyed.

Open mat sessions gave me lots of helpful advice and tips as well. Laura managed to say she could see potential in me, which was awfully nice of her. I should also remember to check I’m not turning my back on the opponent (I know! I don’t know why it was happening!) and to practice sweeps from the bottom more.

I am really effing proud I managed to do several hours of jiu-jitsu for two days in a row! I’d just gotten used to doing three 1-2 hour classes a week plus Boring Gym. I was of course exhausted at the end but only cried a little. And I made my first Facebook friends in jiu-jitsu, apart from Laura that is. We can thus deduce that camps, especially non-male camps, are cool and should be attended always.

Here ends my report from Tallinn.