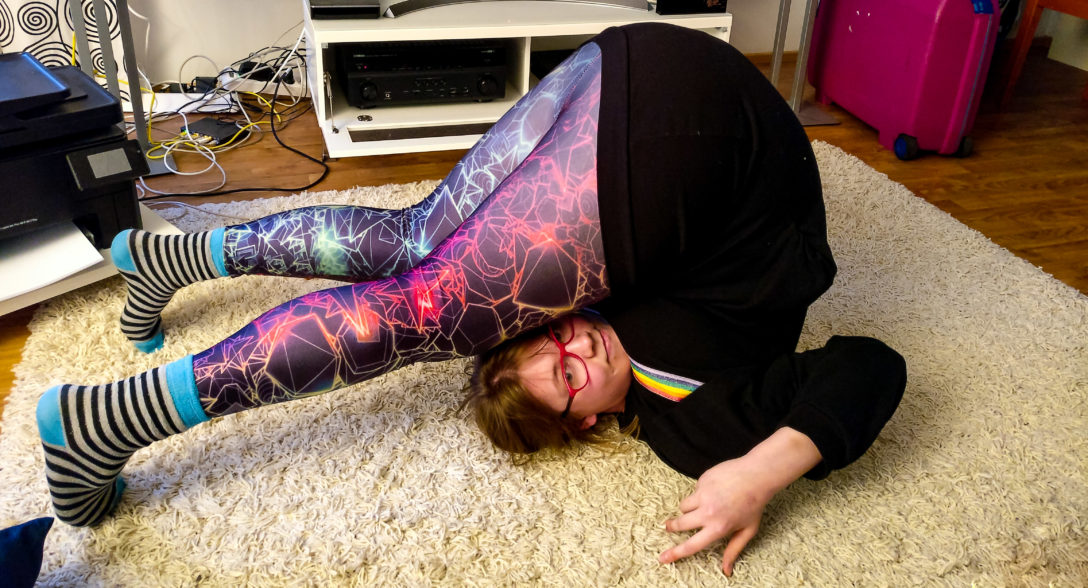 I was the Worst at Doing All the Things at our six-week BJJ beginner’s course when I started, including following instructions, differentiating left from right, and doing aerobic warm-ups without wheezing afterwards. Everyone has their own journey, and such platitudes. This weeks BJJ life served as a brilliant reminder that I am indeed capable of some things that were beyond my reach last November. Let me tell you about them!

Especially frustrating during my first week of BJJ was realising I couldn’t even do a simple forward roll over my neck. The kind most little children can do, and everyone else at the class did it seemingly without any effort. This shortcoming quickly became my Moby Dick, but this Tuesday  I won a tiny bit. After 90 minutes of being puzzled by new escapes from half guard, I squatted on the tatami, put my hands in front of me, and tipped forward.

Never mind that I barely have seen any grapplers using this basic roll sparring or competing. The payoff of finally pulling of something this unnatural to me felt amazing.

… of course, I tried again on Sunday and failed again, hitting my head on the tatami. I blame leg muscles being exhausted from Boring Gym and will keep practicing. I could be spending my time with more useful things but am unable to let go at the moment.

2. I Accidentally Used A Technique from Another Class During Sparring

Tuesday. Sparring with one of the blue belts who teaches beginner’s classes, I used my half guard to flip myself over and (almost) onto his back.

“Hah, you’ve been to Coaches’ classes” he chuckled. Head Couch had indeed taught us that particular technique the previous week. Not that I remembered. “I didn’t know I knew that”, I cried and tried not to get submitted, mostly failing. On Sunday, I used the escape AGAIN during sparring, weirding out the three-stripe white belt who was getting into BJJ after a break and didn’t expect that move. So even with my poor battered brain, details have starting to sink into my muscle memory. Who would’ve thought?

3. I Can Laugh During Training

Sometimes sucking hard can make me feel like crying, like last Friday. I couldn’t get the ukemi forward to work from a standing position and sideways ukemis looked pretty unimpressive as well. A while later, I was practicing takedowns with a friendly whitebelt who didn’t take himself too seriously and made me feel safe to fail too. We laughed a lot at our respective takedowns. During Tuesday’s sparring, the bluebelt laughed at the weird noises I make during rolling: yelps of frustration or exertion, mostly. The giggles were contagious, I couldn’t help but find the situation funny as well. I know by now that my training partners don’t care that I’m pretty bad at jiu-jitsu and are not there to voice their disappointment in my lack of skills. This has helped me relax and to focus on my actual performance more. I’m so grateful to have found a sport that feels amusing to do. Except that today’s instructor contested that BJJ is not exercise. BJJ is human chess, apparently.

4. I Have the Stamina to Exercise more than 2 Times a Week

I have never been entirely sedentary. Except when the brain surgery happened, and even during the surgery itself I was sitting up. That’s another story, however. Before BJJ, my routine was to go swimming once a week and to go to Boring Gym once a week as well. Now I’ve reached a point where I have Boring Gym once a week and BJJ 2-3 a week. I’m still not one of those champions who does 5-7 BJJ classes a week plus yoga plus strength training. This is okay, maybe I never will be. Let’s see what happens.

Even slow progress is progress. My friend asked me when I was going to compete. I don’t know, except that watching the Nordic Open streams this weekend reminded me that yes, I want to at least try a competition soonish. Of course, I need to get a bit better at, well, all of BJJ, but I would like to know if there is a more effective way of learning than my current one. So I’ll challenge myself to talk to Coach about competing the next time I see him.